Launched in 2021, CoinSaga Casino offers a plethora of virtual gambling adventures to its visitors.

The website’s theme is funny, with trolls hiding in the mountains, building their troll kingdom. Once accepted into this realm, you will have a chance to progress from a rookie troll to an Emperor, while at the same time enjoying lots of live casino content, as well as slot machines and non-live tables games.

Needless to say that all content is browser-based and mobile-friendly. Since CoinSaga Casino has a license from the jurisdiction of Curacao and combines digital and fiat currencies in its cashier, it is capable of accommodating international players.

It does, however, also have the main countries that it is tailored for. The list includes New Zealand, Japan, Australia, Canada, Russia, Ukraine, and China. As for the language adaptations, you will find an EU flag for a version in English, as well as a selection of Chinese, Japanese, and Russian among other languages. 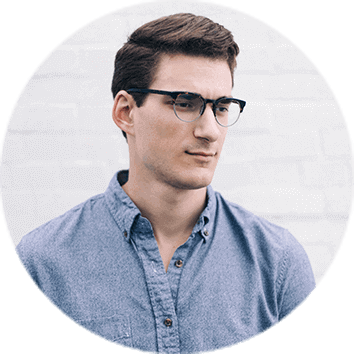 When giving CoinSaga Casino a test drive, I enjoyed everything, from its perky design and cute mascots to a great live casino lobby. It has 90+ releases from a group of established live dealer suppliers. And the list of promotions at CoinSaga is second to none!
James Hoarden
Professional Live Casino Reviewer

As we’ve already mentioned, there are 90+ table games in the live lobby. They are delivered by a team effort of Evolution Gaming, BetGames.TV, and Pragmatic Live. Each of these studios has its unique features. BetGames.TV, like no other brand, knows what great lotto games look like. Pragmatic Live is all about altering something that’s considered classic and turning it into a new and exciting experience, while Evolution Gaming has the biggest selection of games per cohorts.

Because this is a website targeting international traffic, there will be lots of native tables, especially as far as roulette selection is concerned. You will find dealers speaking French, Russian, German, Swedish, Danish, Greek, and Arabic.

Each of the companies offers a portable adaptation of its releases, with scalable games that would easily adapt to smartphones and tablets.

Other Games in the Lobby

The specialty of these and other studios is slot machines, with a few of the brands also manufacturing table games. As far as the slots go, your choices as a player are limitless. Pick between preferred genres, themes, reel configurations, payline patterns, betting limits, advertised payouts, and winning features.

To mention a few out of many great reeled adventures in the lobby, you will find Lucky 7, True Illusions, Mr. Vegas, Dr. Jekyll and Mr. Hyde, Puppy Love, and so much more!

To give you the inside scoop on the table games, the collection includes American and European Roulette, Blackjack Double Exposure, Single Deck, and Multi-Hand, as well as baccarat, a few table pokers, and video pokers like Deuces Wild and Jacks or Better.

We usually start this section by describing a classic welcome offer that almost every online casino has. In the case of CoinSaga, however, we would like to jump-start immediately to the Live Dealer Bonus. Yes, the platform has a designated promotion for fans of live content! It is a 100% cash match available on a deposit of at least 3 mBTC. Also, the promotion is available in fiat cash. The wagering requirements are 50xB, and there are 30 days to meet them.

Next in line is the classic welcome deal, which is a 100% cash match plus bonus spins. This offer can be credited in crypto and regular cash, and it must be played through 36xB in order to be cashed out. A side note here: the bonus cash is non-withdrawable, but you can claim money won from wagering the bonus.

In addition to these two hefty packages, CoinSaga supports an array of weekly propositions. In fact, there is a promotion every day of the week, Monday through Sunday. Plus, you will be able to explore cashback bonuses, reloads, tournaments, and VIP perks.

The team of the platform made everything in its power to create a truly entertaining loyalty program. It is called a Coin Quest and allows you to start as a rookie Wanderer Troll, to then turn into the experienced Emperor troll. In between, there are tiers like Knight, Wizard, and Lord, each sub-divided into four smaller tiers-missions to complete.

The list of VIP perks includes points for every spin, more cashback, dedicated managers, and many other benefits. 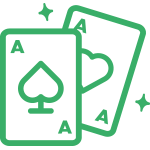 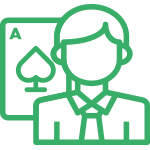 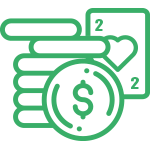 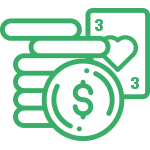 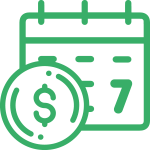 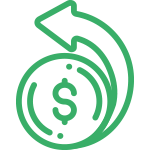 Cashback is automatically paid out to all eligible players every Monday by 12pm GMT. Cashback is given as bonus money with 1x wagering. You have 24 hours to claim it and must be spent by Sunday midnight (GMT) before the next cashback payout.

Minimum deposits start from 10 Euros or an equivalent in other accepted currencies. If we are talking about alternatives, the cashier accepts US, Canadian, Australian, and New Zealand dollars, as well as Norwegian krone, Russian ruble, and Japanese yen. Plus, it is friendly to all the major cryptocurrencies, such as Bitcoin, BTC Cash, Ethereum, and Litecoin.

Minimum cashouts start from 20 Euros or an equivalent in other currencies. What’s great about CoinSaga Casino is that it does not limit its users to any weekly or monthly maximum payout limits.

As for the payout speed, the team reserves up to two workdays to process the cashout requests. They are then sent to either of the crypto-wallets of the player’s choosing or to Visa or Mastercard cards. These are the only two banking methods accepted by the cashier along with the digital wallets.

How does CoinSaga Casino compare to other live lobbies?

This is a hip, fun, modern lobby where the team appreciates players who came for live games. CoinSaga is one of the few casinos where there is a welcome bonus for live dealer content. Plus, there are daily promotions for the regulars, fast cashouts, 2,500 releases to choose from, and gambling in crypto or fiat cash.

How can I start playing at CoinSaga Casino?

You will need to create an account, which takes only a few minutes. Then, make the initial minimum deposit and claim a welcome bonus, if you enjoy those.

Are there no deposit promotions at CoinSaga Casino?

We did not spot any when we were writing this review, but we can assume such promotions may become available among seasonal and special deals. If the no deposit promotions do appear, don’t forget about common mistakes to avoid when claiming such offers.

Are there demo versions for live games at CoinSaga?

No, live casino games rarely come with demo versions. But if you would like to master your skills before betting real money, we have comprehensive guides on common reasons for losing in blackjack, and the best strategies in baccarat.

How quick are the cashouts at CoinSaga?

Withdrawals will take between 24 hours to four work days depending on your verification status and the selected payout method.

Reasons to Register at CoinSaga Casino?

Their selection of language adaptations is great and you will most likely find a dealer speaking your language, especially when it comes to live roulette.
CoinSaga experience is flavored with many great welcome and ongoing promotions, including deals for the live lobby.
The cashier is flexible, accepting deposits and managing withdrawals in major fiat currencies, as well as in crypto.
VISIT COINSAGA CASINO LIVE DEALERS NOW - CLICK HERE >>
Top Live Casino Sites
Casino
Game Selection
Deposit Options
Providers