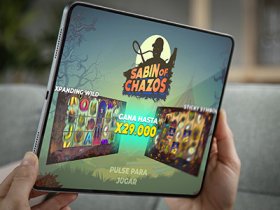 Powerful slots developer, R. Franco, has teamed up with popular Spanish- streamer, Andypsx, for the introduction of Sabin of Chazos across its network.

The famous casino brand and poker expert, who regularly posts on YouTube and live-streaming platform Twitch, will support the brand in launching a new slot with a particular stream that is intended for its large following of 120,000 people.

The main action of the new title takes place in the Sabin of Chazos circus, allowing players to see exotic animals such as the Crocodog: half dog, half crocodile. Customers must tame them and claim big winnings in the 6×3 game, with 729 winning ways and an incredible prize of 29,000x.

The main symbol of the game is the Wild which takes the form of the animal tamer and lands on the two main reels. It substitutes for all symbols except the Scatter. Within the base game, each time this symbol lands, it expands to cover the entire reel. Then you can see a Respin of the remaining reels, with the Wild element keeping its position. If another Wild lands during the Respin, the feature will start again.

During bonus spins, each time the Wild symbol lands, it will not extend but will be connected with one of the prize multipliers: x1, x2, x5. It will also release the Sticky Symbol feature, where each Wild that shows up stays in its place until the end of the round. In addition, there is a chance for the player to buy a Bonus Spins entry.

“Our talented team has once again walked the tightrope and come up trumps with an amazing game in Sabin of Chazos. On top of that, we are confident that by launching the title with Andypsx, we will strike a chord with the tech-savvy millennial market. The fact that he has so many followers on social media will ensure incredible coverage of our new slot.

“This is a theme that has proven popular time and again but still contains plenty of potential. We fully expect it will be a hit with players across all demographics.”

Franco Digital belongs to the Recreativos Franco Group, an innovator in creating recreational machines with over 50 years of experience. Since its start as an arcade machine reseller, the company has become an international enterprise and leader in the production of gambling solutions.

Source: “R. Franco is running away to the circus for Sabin of Chazos streamer”. European Gaming. October 21, 2021.