Juicy Stakes Awards Users with Spin Codes and up to $500 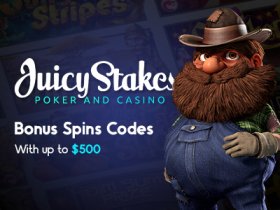 Juicy Stakes is running an excellent deal for its members. If you play some of the best slots at the site, you can claim some spins as well as a prize up to $500. The bonus is available until October 18th, and only few days are left to qualify…

The site is focused on delivering different promotions for its players. The latest in a row is available on famous slots and you can check out more details below:

30 Casino Spins on Tower of Fortuna

80 Bonus Spins on Dragon and Phoenix

Bonus Spins on Quest to the West

More About the Rules of the Deal

Players who are willing to explore the world of ancient characters and spin the reels should start playing participating games. Along the way, you can see the gods and the Roman Empire, or embark on a journey to ancient China in the Bonus Spins Week. There are also casino spins on the latest game Tower of Fortuna and other titles – Take Olympus, Dragon, and Phoenix, and Quest to the West slots.

Tower of Fortuna is a powerful game with three reels and opulent features typical for five-reel slots, such as bonus spins and win multipliers that boost as players go up to the tower.

During the Take Olympus experience, Greek gods are blessed with special powers to deliver multipliers, wilds, and casino spins. Mighty Zeus has an expanding power with the possibility to cover his reel and deliver bonus spins. On the other hand, the Betsoft game Dragon & Phoenix includes an elegant royal pair, extended Wilds which can produce up to an 8,000x reward, and a cascading money tree that reveals instant prizes.

If you choose Quest for the West, you will be able to follow the story of the Monkey King on a trip through uncharted lands while searching for the riches of the West.

More on the Brand

Juicy Stakes is a one-of-a-kind platform, featuring casino games and poker rooms. Founded in 2009, the site offers popular poker versions such as Texas Holdem and Omaha while also blending popular casino titles – blackjack, baccarat, dice, roulette, slots, and craps. It also provides the first deposit bonus of 200% up to $1,000.