Which Roulette Games Are Offered With Live Dealers?

When you visit a physical casino you’ll be lucky if you get to experience more than say, 2 roulette tables in the whole place. You never have that worry when signing in to live casinos, with a wide range of roulette tables and games to choose from wherever you choose to play. From American Roulette, to European Roulette and French Roulette, you’ve got a few choices to make.

There are several differences between each type of roulette game, plus many little differences from interface, settings, special bets and limits and whether you are playing roulette with live dealers. Making that right choice for you could just be a case of playing around and finding the live casino for your roulette needs. We’ve decided to help you make a fully informed decision, with a review of the different types of roulette available, so you can play for real money without worrying about the outcome.

Live casinos and online roulette allows you to explore a plethora of options however, and we are always finding new, exciting and innovative live roulette games to play, such as Lightning Roulette, Age of Gods Roulette and Double Ball Roulette. All with slightly different variations of play, stunning graphics and fun to be had! 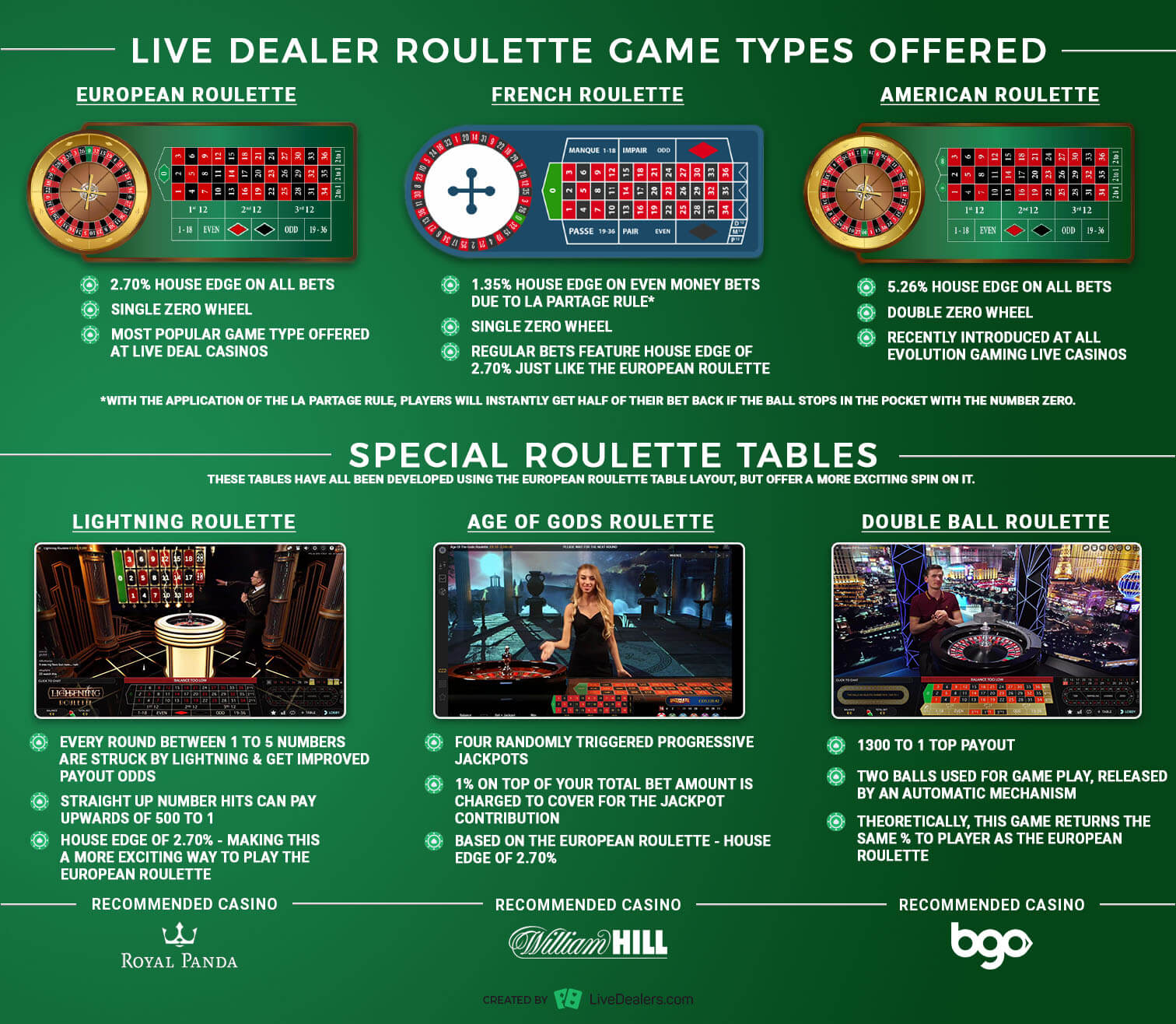 For French live Roulette options with an online casino we would highly recommend you check out Unibet Casino, as well as the delightful choices of roulette games through Evolution Gaming. French Roulette is the ultimate classic choice for roulette connoisseurs. It has the lowest house edge out of all variations (1.35% when you the La Partage Rule) and is often considered the most popular version of the game when playing for real money.

Much like European Roulette, the French version features only one zero and also includes the classic number sequence. Where you’ll notice the difference is with the table layout. In French Roulette you’ll see the La Partage Rule, which lowers the house edge to 1.35%.

The rule states that you’ll receive half of your money back should the ball have landed on zero after you have placed an even money bet. The En Prison Rule offers a slight variation on the La Partage Rule, with an even money bet being held on the same spot for the next spin, should the ball have landed on zero. It provides players with a second chance to win and cuts the house edge in half once more.

Most online casinos will provide a version of European Roulette with live dealers, with Leo Vegas a particularly good choice that we would recommend. European is the version of roulette that is the most searched for by players of online roulette. It has a lower house edge than American Roulette (2.7%) and like French Roulette only has one zero slot on the wheel.

The number sequence is the same as the French version, but you won’t find the La Partage and En Prison Rule in play with online European Roulette. It is a balance between the French and American versions of roulette, with the house edge in between the two and an easy to understand playing format and style. As another point of reference for European Roulette with live dealers you can take a look at VSO live dealer section.

We can recommend American Roulette with live dealers to be played at Royal Panda. To be frank, the rules are pretty much the same as with French or European Roulette but there is a small difference visually that makes a big difference in terms of placing your bets, and that is the addition of the double zero slot.

What does the appearance of the double zero slot, next to the single zero, mean to your chances? Well, it means that you can bet on 38 numbered slots, not just 37, but it also ensures that the casino has a large house edge of 5.26%. This is nearly twice as big an advantage to the house when compared with European Roulette for example (2.7% house edge). Another difference to American Roulette is that due to the zero slots appearing twice, the other numbers are arranged in a slightly different way to how you may be used.

As we mentioned, there are now a whole host of exciting live online casino providers with a plethora of roulette with live dealer options. Evolution offers Lightning Roulette, a live game that provides players with boosted pay-outs and a magnificent interface. Players have the choice of all the standard betting options, but on top of that there is a unique Roulette option, with 1 to 5 random lucky numbers generated, with pay-outs from 50:1 to 500:1 as straight up bets.

Each round, all lucky numbers are put back in place in order to offer a new chance at an enhanced win. Lightning bolts and sound effects to signify electricity are added to make the whole experience that much more fun, with detailed statistics allowing you to analyse your performance.

Evolution Gaming has also come up with the Live Double Ball Roulette, an innovative live roulette game that offers players an exciting new way to play. The name speaks for itself, you’ll have two balls in play at the same time, the game of roulette with live dealer giving you even more chances to win than usual!

Pay-outs can reach 1300:1 with the two balls and different bet variations available. The interface and graphics have been looked after in a professional way, with multiple HD camera angles of the table, wheel and dealer, as well as a global view.

Overall you’ve got to favour the French Roulette if you are looking to place even money bets, due to the house edge being so low at 1.35% when the La Partage Rule is in play. We would always recommend steering clear of American Roulette with live dealers due to the high house edge of 5.2%, but with new and innovative games such as Double Ball Roulette and Lightning Roulette, there are always new and exciting ways to explore online roulette with live dealers.