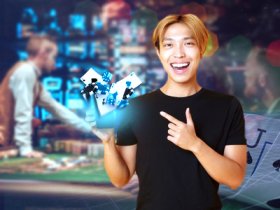 Any fan of casino gambling can attest to the incredible possibilities of online play today.

The possibilities would have been unimaginable even a few short years ago! Today’s punters can play virtually any game, at virtually any time, from virtually anywhere in the world, and have their pick of casinos in the bargain!

With the explosive growth of Live Dealer games, the time seems right to take note of how far things have come.

Let’s take a look in the rearview mirror to discover just how we got to this moment.

(Our sister site Real Money Action offers an excellent guide to what this looks like for slot gaming specifically.)

Like many other frontiers, online gambling started with a bang.

In the mid-1990s, the widespread use of dial-up internet transformed just about every industry… and gambling was no exception. In fact, things developed so fast that government regulations had to play catch-up.

For a while, it was the Wild West out there!

The 1994 Free Trade and Processing Act of Antigua and Barbuda changed all that. For the first time, gambling providers could apply for licenses to operate online casinos legally.

This might seem like a minor thing but make no mistake: this was a transformative moment. Applications poured in from would-be online casinos all over the world. Soon, the UK and Malta followed suit. Legislation was updated, regulation was made possible, and the foundation was paved for today’s multi-billion-dollar industry to flourish.

The Rise of Online Casino Gaming 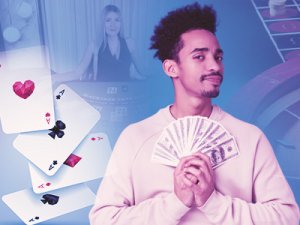 Things moved fast from there.

There was only one problem…

…there was no real money being wagered, lost, or won!

The reason? The software for safe and secure money transfers hadn’t been created yet! That changed the following year, when Cryptologic introduced the first reliable online money transfer. That’s how InterCasino, who first put this new system into practice, became the first online casino to accept real money bets… even though, in many ways, Microgaming got there first.

If growth had been fast up till that point, it soon became meteoric. At the end of 1996, only 15 gaming sites accepted real money deposits. A year later, that number was well over 200.

If online gambling was already a major force, it was still barely a shadow of its future self. What was holding it back?

For one thing, internet speed. Back in the days of dial-up, only the simplest of games would be viable.

This wasn’t simply a matter of visual designs, but of gameplay itself: only about 20 casino games were available in those early years!

Even those were limited by unreliable internet connections. Loss of connectivity could potentially cost players big time, and there was no way to avoid it…

… until Broadband internet came around, beginning in 1996.

The game of Poker was the first to break through to the next level of what online casino play was capable of.

As the Broadband Revolution took hold, it was Planet Poker that emerged as the industry leader. Its poker room, launched in 1998, became an international destination for players. Although play would be tremendously slow by today’s standards, modern players would find themselves otherwise in familiar territory there.

Towards the Contemporary Live Casino Experience

From that point on, growth settled down and online gaming gradually moved towards today’s standards.

Much of the improvement has been made possible by improved internet and data processing speeds. This has allowed for vastly improved visual interface… at first, this meant richer 2D graphics, then video animations, then interactive video.

It was only a matter of time until a provider had the bright idea to put another actual human on the other end of a webcam.

In many ways, putting a live dealer at an online gaming table is the most obvious thing in the world. But from a different point of view, it’s the exact opposite of what gaming companies had been trying to do for years!

Designers were trying to build the most exciting software possible. The whole idea was that it was a one-sided affair, to be enjoyed by the players without any human capital investment on the side of the casinos.

Live dealer play changed all that.

With technology capable of live video conferencing, however, it was possible to give players the feeling of being in a brick-and-mortar casino without ever leaving their own homes.

From Beta to Alpha 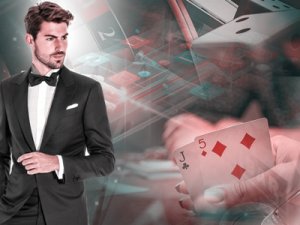 It didn’t happen overnight, though!

The first live dealer offerings fell well below the standards of top casino croupiers and dealers.

It took many years to get to where things are now, where specialist academies like Malta’s Online Live Casino Academy have taken root. There, croupiers are prepared for a career in front of the cameras with training that is absolutely on par with what top brick-and-mortar dealers receive.

Not only that, but the streaming sights themselves have improved tremendously!

If today’s live dealer games look phenomenal, it’s because providers have learned a lot about top-tier production values. Lighting, camera work, and microphones are not quite at a Hollywood level, but they aren’t far below them either!

Looking at the incredible array of options available to today’s players, as well as their increasingly excellent quality, it’s hard to believe that there used to be problems just depositing funds!

Things have come a long way fast, and the future looks bright.

No one can know what players’ options will look like twenty years from now, but all attentive players have good reason to be excited.