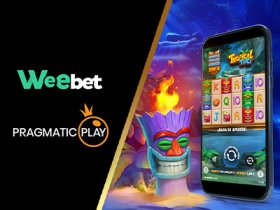 Pragmatic Play, one of the most powerful providers of content, has closed a deal with Weebet for its RNG and live casino in Brazil.

This agreement will see the operator gaining access to the provider’s full slot suite, including the most interesting releases Gorilla Mayhem™, Big Bass Splash™, Gates of Olympus™, and Wild Beach Party. Apart from it, the provider will include its full live casino solution live with Weebet, such as Roulette and Blackjack, as well as gameshow Sweet Bonanza CandyLand and Mega Wheel.

Weebet is yet another partner in Latin America to involve two verticals from Pragmatic Play, as the brand continues its staggering commercial momentum in the territory.

“We continue to grow our footprint across Latin America, and Brazil is an incredibly exciting market.

“Taking two products to live with Weebet is another positive step for us in the region, as we look to further consolidate our position as the leading supplier in LatAm.”

On the other side, Lenildo Nogueira, CEO at Weebet, says that Pragmatic has a deserved reputation as one of the leading providers in the industry, and is very happy to sign an agreement with them. Thanks to the ability to include multiple verticals live with only one push of the button is very positive for the brand, so they are looking forward to working together.

Another Release from the Company

The developer is focused on improving its content with more interesting games and high-quality content for different sorts of players. The brand has just added Gorilla Mayhem™, an exciting adventure where you can see colorful inhabitants, involving a leopard, crocodile, hippo, macaw, snake, and ape. Just match different symbols across the reels and collect winnings as soon as possible. Here you will see wilds, scatters, bonus spins round, progressive wins, and take your gameplay to the next level. The maximum sum you can win from this game is 5000x.

Details on the Company

Pragmatic Play is one of the widely established gambling brands in the sector with more than five years of experience and a suite of over 200 HTML5 games. Players who choose the brand can enjoy different themes and features including the most popular categories – slots live casino, and bingo. Pragmatic Play continues to nurture a sustainable relationship with its customers while also taking care of responsible gambling.