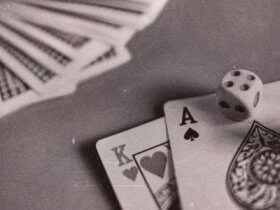 Once upon a time, the world of online casino gambling was dominated by roulette and blackjack, with craps getting an honorable mention as well. It was a predictable time for players and casinos alike.

This days are over! Nowadays, the world of wagering is more diverse than ever before…

…and grows more so by the day!

Amidst the many trends picking up steam in the industry, perhaps none is stronger as the massive baccarat boom taking place in the West.

Though baccarat has dominated the Macau casino scene for decades now – sometimes accounting for a jaw-dropping 90% of the annual profits of some major casinos – this hasn’t been the case in Las Vegas, Atlantic City, or Monte Carlo.

The answer is rooted in the game’s rich history. Let’s take a detailed look into baccarat’s past, to better understand its present and future.

As with some of the greatest innovations in human history (see: the wheel), no one is really sure when and where baccarat first appeared.

Some trace the origins of the game all the way back to Ancient China, where the game Pai Gow (which means ‘Make Nine’ in English) used tiles to denote numbers. It may well be that this great game was born in the East, not the West!

There are also tales of Ancient Roman soldiers wagering on dice games with nine-side dice. This may also indicate a connection to modern baccarat.

This much is known: the first official rules for what we recognize as modern baccarat were devised by the Italian card shark Felix Falguiere in the 1400s.

In fact, the very name of the game is Italian in origin: “baccara” was Venetian slang for “zero.” Supposedly, the early game was played with tarot cards! 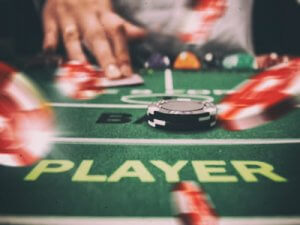 This new game was an instant hit, especially among soldiers. Some French fighters brought the game back to their homeland in the 1490s, where it became a massive favorite of the noble classes. They even developed a new variant called baccarat banque, which can still be found at some tables today.

This is really the beginning of the association between baccarat and wealth. No other game has been associated with upper classes (and high betting minimums) quite as much as this one, and that connection has been going strong for over 500 years!

It was in France that such recognizable, modern variants as Chemin de Fer (literally ‘the way of iron,’ colloquially meaning “railway”) and so-called European Baccarat were born. Chemin was probably invented and played on the newly-built railway trains of the 1830s as a way for the monied classes to pass the time.

As did so many people, traditions, and ideas, the game of baccarat crossed the Atlantic to the New World in the 20th century.

Interestingly enough, though the game reached the USA in the 1870s, it was really in South and Central America that the game took hold.

For example, it was in Havana, Cuba that punto banco was invented.

Up until this time, baccarat was played by one player against the other, with the house taking a percentage of the action – similar to the rake in a modern casino poker table.

It was in this new variety (also known as American baccarat) that it became possible to play against the house directly.

That means that only in last century or so did baccarat acquire the incredibly low house edge of 1.06% for which it is now famous.

The name is Bond… James Bond

The fame of the game of baccarat in the West got a massive boost from the arrival of James Bond.

The now-ubiquitous British secret agent made his first film appearance seated at a baccarat table, and from that moment on, baccarat was inseparable from the rugged elegance of 007 was inseparable in the minds of Westerners.

In fact, many American tables in the 1970s and 1980s were reserved for high rollers only, with dealers wearing tuxedos and ball gowns, in the hopes that this more formal approach would entice big bettors with Bond-like glamor.

It’s only in recent years, with the rise of mini-baccarat, that the game has become accessible to players of all bankroll sizes.

The Sun Rises in the East

While it’s well and good to discuss the westward march of baccarat from Italy to the new world, there’s no question about where the global capital of baccarat is to be found…

It’s almost impossible to overstate how popular the game is there. The physical footprint is absolutely massive, and countless variants have sprung up offering faster-paced play, side bets galore, and all kinds of twists on the game.

In the scheme of things, it’s astonishing to see just how much history the game has! Across continents and centuries, the quest to ‘make nine’ has taken all kinds of forms. It will be very exciting to see where the game goes next!

One thing is for certain: even with 500 years in its rearview, baccarat is currently booming in the West, and already a juggernaut in the East. Things are trending upwards!