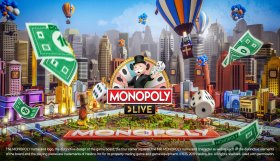 Who else but Evolution Gaming could create a live casino game based on Monopoly? The leading developer of live games is bringing their latest creation to Mr Green Casino (read review here). Moreover, there is a tidy and very prosperous promotion attached to the new game, too. Read on if you fancy bagging a share of a €5,000 pot for yourself at Mr Green.

If you’re a fan of Monopoly, then playing Monopoly: Live will be a dream come true for you. Play the live dealer game between July 28 and August 4. If you end up as one of the top 20 players in the promo, you’ll pocket a prize. Here is how Mr Green Casino’s Monopoly Live €5,000 Cash Race promo works…

Most of the terms and conditions in Mr Green’s £5,000 Monopoly Live Cash Race as the same as usual. The more notable exceptions have been included below: