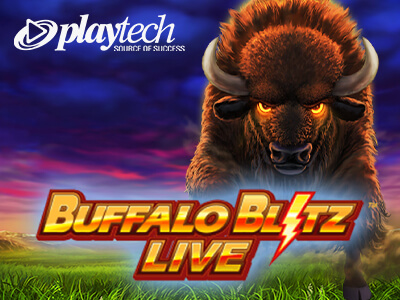 Two of the most popular sectors in the online gambling industry get a shotgun wedding in Buffalo Blitz, the live slot from Playtech.

In a very exciting way, this is something the industry hasn’t really seen before!

It’s no secret that live games are one of the hottest trends in the world of online casino play these days. New releases from top designers seem be coming out every day,

At the same time, slot gaming remains king of the industry. According to some estimates, online slots alone account for 70% of an online gambling sector expected to become a $127.3 billion industry by 2027.

When these two factors are taken together, it seems inevitable that live slots should enjoy a very bright time in the sun.

Yet for one reason or another, this trend has been slow to develop.

By combining the most popular elements of live games and video slots, Playtech’s design team has created something groundbreaking that seems obvious in hindsight. They’ve taken an extremely successful slot as inspiration – the original Buffalo Blitz was a massive success among players and critics alike. If this iteration of this classic is anywhere near as successful, it will be a force to be reckoned with.

Will this be the case? How did the design team go about this hybrid approach, and what does the resulting title have to offer players?

Before answering those questions, let’s take a closer look at the company that brought it to the world. 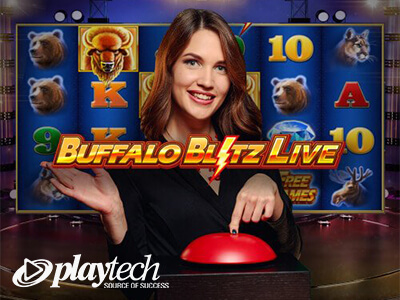 Even with today’s increased parity, driven by major successes from previously unknown companies, Playtech remains an absolute powerhouse in the industry.

They are the largest publicly traded online gaming software company in the world; they boast a catalogue of over 250 games that covers just about every possible variety of gaming style and structure, from arcade games to baccarat, slots, and even virtual horse racing; and they seem to be constantly in the news as they expand into new markets.

Whatever way you look at it, this company is right in the middle of the action!

Since their founding in 1999, this Estonian company has grown and innovated with remarkable consistency. Today, they are one of the business’ leading brands, with a thriving catalogue of top titles, collaborative agreements with other top companies all over the world, and much more in the works…

… with no sign of things slowing down anytime soon!

Their reliably excellent standards provide a big part of why they’ve been so successful for so long. And with the splash their Quantum series seems to have made, it does seem that they’re taking things to the next level.

So how does this blue-chip firm do in this title? And for a company that has already delivered several top-notch live blackjack games, what makes this one unique?

If building the perfect slot / live game hybrid were simple, every company would have done it by now. How does Playtech go about it?

Visually, the blend of the two styles is executed with elegant simplicity. A well-dressed host stands next to the six reels, leading and commenting on the gameplay. Aside from that, design strongly resembles a traditional slot game – the reels take center stage, with player controls on the lower level of the screen.

Like any other live title, the game is streamed live from the company’s studios (located in Latvia, in Playtech’s case). While players will get the same result for each spin, each individual controls their own bets, so the payouts for those results will vary.

It’s with the gameplay that things get interesting.

Each round begins with a kind of simulated auto-spin selection. Players choose their overall loss and win limits, the number of spins they wish to play, and the amount they wish to wager per spin. After that, the game will stay active automatically, the reels spinning any every few seconds.

There are 4096 ways to win in this title. The lower-value symbols are made up by playing card values, while animals like bears, raccoons, and moose provide higher-value symbols. The top payout belongs to the buffalo, offering 300x for six of a kind wins.

The Free Spins Scatter symbols open the way to the bonus round. Eight freebies will be awarded at first, but if six or more scatters appear during the feature, players can unlock a whopping 100 additional free spins.

There’s also a wild symbol to contend with. It helps form winning combinations in base play, and during the bonus feature, it can add win multipliers from 2-5x.

All told, this slot offers an RTP of 95.96%. Not bad compared to some live games, but compared to top-tier slots, the house edge is a bit higher than we’d like to see.

Since Playtech is such a well-regarded and -respected designer, players enjoy a solid variety of choices when determining where to play.

One excellent option is LSbet, a fine outfit that offers reliably solid bonuses for sign up, 2nd deposit, and the like. In addition to solid live dealer options, they also offer sports betting, table games, and much more.

Another potentially worthy suitor is Casoo. They are an internationally well-regarded site that offers competitive bonuses for initial deposits and much more.