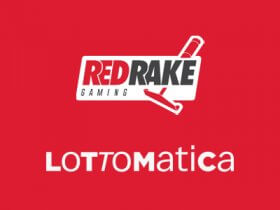 Top-tier provider of casino content, Red Rake Gaming (RRG) has teamed up with Lottomatica, an Italian lottery operator. The new partner is well-known for producing sports betting, online lotteries, and classic table games as a real titan in the iGaming sector.

The agreement via GAN will allow Lottomatica access to top-tier games in the market from RRG, which recently teamed up with 888casino. Included will be the games from the Super Series, with non-stop action and powerful features and bonus tools such as the “1 million ways to win” series of games, which is already a favorite among worldwide players as well as in Italy.

RRG is focused on innovative concepts which have allowed the company to stand out from the competition while extending its presence in newly regulated markets. Only in the past year, the Spanish brand has recorded a significant rate of growth due to increased demand for its titles. The brand is determined to continue with the same practice over the following months.

“We are delighted that Lottomatica have chosen to enhance their offering with the Red Rake Gaming portfolio. Italy is one of our fastest growing regulated markets with some incredible volumes being achieved.

Our feature rich games with in-game interaction features have hit the spot with our Italian players and this partnership further solidifies our strength in the marketplace. We look forward to furnishing Lottomatica’s players with our content and confident our partnership will go from strength to strength.”

Red Rake Gaming is an eminent provider of casino games, which consists of more than 40 industry experts. The company has been working on game development since 2011. It started with the social casino business and continued with the real money casino business during 2016. Apart from offering a great selection of games, Red Rake supplies its partners with powerful tools such as FRB (promotional tool) and the Replay feature. Its gaming catalog includes more than 40 slots, roulette, video poker, bingo, and blackjack titles. Thanks to its slot optimization for both mobile and desktop devices, clients can take advantage of the maximum level of innovation and reliability. Games are available in 22 languages including English, German, Spanish, Chinese, Russian, Japanese, and similar. Red Rake has licenses from the UK Gambling Commission, Romanian National Authority (ONJN), and the Malta Gaming Authority.