Evolution Schedules Deal or No Deal Live Tables Launch for 2019 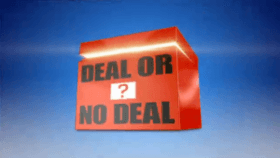 The hit television game show Deal or No Deal will soon have live casino adaptations thanks to Evolution Gaming. The leading provider has announced the development of live dealer roulette and live dealer blackjack titles based on the popular TV game show.

About Deal or No Deal

For those who aren’t familiar with Deal or No Deal, it is a successful TV game show in which the player is given a choice of 26 sealed briefcases containing various amounts of cash. Without knowing the amounts stored in the briefcases, the player gets to pick one and keep it until the game ends when the prize is finally revealed. The game continues with the player instinctively eliminating the remaining 25 cases. As he/she eliminates them, they are unsealed one by one and the cash amount inside becomes known.

A mysterious entity known as the Banker adds more pressure into each round by offering the player a fixed cash reward in exchange for what is in the chosen briefcase. The host asks the player the same question repeatedly: Deal or No Deal? The TV format was developed by Endemol Shine Gaming within the Endemol Shine Group, one of the world’s biggest distributors of entertainment content, including reality TV, comedy programs, game shows and more.

Evolution Gaming and Endemol Shine have signed a partnership that will result in Deal or No Deal live roulette and live blackjack tables in 2019. This is the first live casino project for Endemol Shine Gaming which should cover several European markets as well as North America.

Todd Haushalter, Chief Product Officer at Evolution Gaming, expressed his excitement for bringing such content to online gaming and added that “Evolution will do its best to provide its customers with the possibility to play along with their favourite game show, for real money at the comfort of their homes”. With the purpose of pushing the innovation boundaries Evolution Gaming has started introducing game show style games into its portfolio last year. Due to the huge success of mentioned games, we’ll soon have Deal or No Deal live roulette and live blackjack tables available at major Evolution-powered online casinos such as Royal Panda and many other of course.