Mr Green to Introduce Weekly Promotions with Total Fund of €40,000 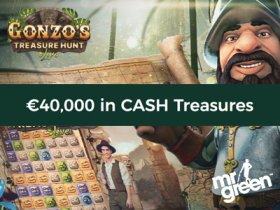 Mr Green has launched another premium promotion for its players. The opportunity boasts weekly promotions and earn part of the total €40,000 pool. The deal is available on the Gonzo’s Treasure Hunt slot and you only need to collect tickets to reserve a place in the weekly prize draws.

Join weekly LIVE Casino promotions on Gonzo’s Treasure Hunt and collect tickets toward the draws. There are four basic draws and one Grand Prize Draw with a total share of €40,000. The deal is available until June 15, 2021.

If you take part in the latest promotion, every €10 you wager on the game will earn you 1 ticket to the weekly prize draw. Additionally, the more draws you take part in, the more tickets you will receive for the Grand Prize Draw reserved for June 18th.

The total amount of €40,000 will be split into four draws and one Grand prize draw. Every €10 you wager on Gonzo’s Treasure Hunt will bring one draw. Each player can claim as many tickets as he wants. Prize draw entries for the Grand Prize Draw are available for taking part in the below weekly draws:

Course of the Promotion

Cash Prizes will be distributed within 72 hours after the end of each draw.

The Grand Prize Draw occurs on June 18th and players will be able to take only one cash award per draw. You will be notified about the award via SMS or Mr Green account notification. It is also important that cash prizes are real money without any wagering conditions. If your account has been self-excluded due to responsible gambling issues before or after the dates of the promotion, you will also be excluded from the deal.