The Five Best Blackjack Movies of All Time 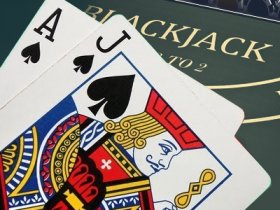 Every casino table game has its appeal, but for lovers of blackjack, there’s no other game…

…and perhaps no other game has inspired as much movie excellence as blackjack.

It’s true that this game offers a comparatively very low house edge, but the game’s appeal goes beyond that fact. There’s a certain nonchalant glamor about it… and much of that suave, elegant quality can be traced to some cinematic gold.

As Live Table Blackjack continues its meteoric rise in worldwide popularity, there’s no better time to get to know the game’s cinematic lore. Here are five titles every player should know:

When it comes to class, virility, and coolness under pressure, James Bond is in a class all his own.

In this 1989 classic, his excellent at the blackjack table is so extraordinary that it functions as a plot point: 007 uses his gaming prowess to effectively introduce himself to underworld figures as a bona fide bad*ss.

Although he eventually allows his winning streak to end, the casino scenes in this film still serve as a manual for optimal winning elegance at the tables.

If blackjack has retained an air of glamor from 1989 to the present, this killer scene is part of the reason why. 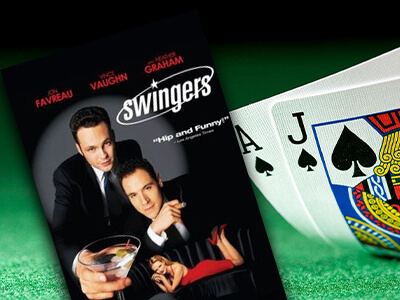 In many ways, this 1996 cult classic presents the opposite of James Bond’s glamorous take on the game of blackjack.

John Favreau and Vince Vaughan star as two nobodies trying to regain their mojo in Las Vegas following a breakup and generally drab life in Los Angeles. Upon arrival in the city of sin, they head straight for the tables.

Where 007 is cool as a cucumber in his gorgeous tuxedo, undeterred by massive bankroll swings, these two guys lose their nerve (and their shirts) very quickly.

They’ve clearly studied the basics of strategy for the game of blackjack, but make the hilarious (and common) mistake of playing at a table with far too high a minimum bet for their bankroll.

Watching these two young, image-obsessed men fall all over themselves trying to play according to the correct strategy even as the stakes destroy their nerves is comedic gold.

While the scene is deeply funny, it also functions as a great warning for beginning players: always play within your means!

Perhaps no gambling trend has received more attention in recent decades than counting cards in blackjack.

This under-appreciated 1996 movie is based on the true story of the MIT card counting team that took casinos for millions upon millions of dollars over a multi-decade period beginning in 1979.

21 isn’t quite faithful to the source material, deviating on several important plot points to make the story line up more with traditional Hollywood storytelling (as well as whitewashing a cast of characters that actually was made of many Asian-Americans in real life).

But the gaming side of things is every bit as thrilling as it happened in real life: mathematics, disguises, fancy comps from glamorous casinos, danger, and, of course, serious money.

There is one downside of the cinematic appeal found here: it does make card counting seem like the purview of literal geniuses. In real life, it’s not all that complicated.

After all, it’s called ‘card counting,’ not ‘multivariable card calculus.’

It’s the coordination of multiple bettors that makes this practice so lucrative, so infamous, and so dangerous (as well as illegal)…. not ultra-complex mathematics.

It sure does make for good cinema, though! 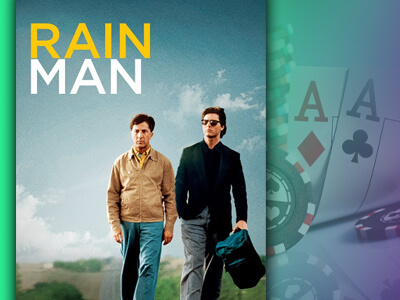 Speaking of card counting, the casino scene in this 1988 classic was in many ways the introduction of the practice to mainstream audiences.

But backing up a bit… from an objective position, this is by far the best movie on this list.

It features performances from bona-fide stars Dustin Hoffmann and Tom Cruise, as brothers who only learn of each-other’s existence after their father’s death.

It was the top-grossing film in the year of its release.

Rain Man also served as a re-introduction of autism to the public, with Dustin Hoffman’s performance emphasizing the humanity and extraordinary intellectual capabilities of his character.

That ability drives the famous card counting scene, where Hoffman’s character facilitates massive wins at the blackjack tables in Las Vegas. Though the casino staff insists that no one alive can count into a six-deck shoe, the brothers make short work of them.

The raucous 2009 comedy The Hangover is basically everything Rain Man is not.

It did nothing to elevate national discourse… on any subject, really, but especially not on mental health!

Though it earned a whole lot of money, the top-grossing film of that year, Avatar, made six times as much.

Though it did feature respected actors Bradley Cooper and Ed Helms, this wasn’t the type of film to expand anyone’e actorly reputation.

It didn’t come anywhere close to winning Best Picture (although it did win the Golden Globe for Best Musical or Comedy).

It did, however, make a whole lot of people laugh… while also continuing to cinematic exploration of card counting in blackjack. It’s almost as though they’re specifically making fun of the famous blackjack scene from Rain Man!

In this case, Zack Galifianakis’ character, who had heretofore been a bit of a waste of space, reveals his astonishing ability to count cards at the tables. As he works his magic, algebraic symbols flash before the screen, and the team leaves the tables much richer than they sat down.

Anyone who learns their gaming lessons from The Hangover should read up on some common gaming myths.

Then read it again.

Blackjack movies are delightful, and should be enjoyed in every way. But skillful players shouldn’t take any cues from what they see on screen!

Not even if the lesson is being taught by James Bond himself.