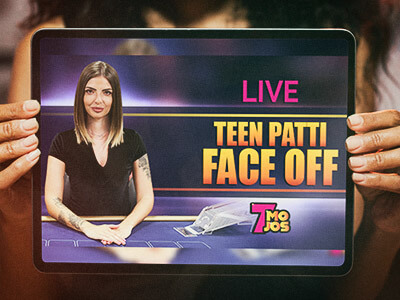 Even if the online gambling industry has been growing at an astonishingly rapid pace for quite some time now, that growth has at times felt somewhat horizontal.

What do we mean by that?

It’s been exciting to see new casinos rise, excellent new games energy, and fresh new talent flourish at the designer level. And yet, with some notable exceptions (like, say, the rise of crypto and the emergence of live dealer gaming), a lot of this growth has seemed, well, eerily similar to what existed before.

Always the same games, presented in the same way, with only nominal changes made to keep players coming back for more. For lovers of gaming, the times were rich, but not always interesting.

That’s all over now.

As gaming companies have been expanding to include more and more international markets, a new kind of growth has been coming to the fore. New games, presented to new communities in new ways.

Want to see some evidence?

Look no further than Teen Patti Face Off, the new live dealer release from 7Mojos!

This company is a relatively new arrival to the industry, making its debut in 2020. Players would be forgiven for assuming that this is a newbie firm, just finding its feet in the world, but that’s not at all the case: although they made their first appearance in 2020, 7Mojos has emerged out of a strong lineage of gaming companies based in Bulgaria.

One of the these, the Zariba Group, founded in 2007, was a major player in the 2010s, winning over untold thousands of fans. And the other, Win Models Ltd., began its work in 2015 and quickly emerged as a live casino specialist (well ahead of international trends). This is the tradition 7Mojos comes from, and there should be no doubt that the hands-on experience won during those two ventures has given this new one a serious advantage.

They’ve already made plenty of news in the business, securing deals with other companies and positioning themselves for even bigger things in the future.

It speaks well of them that their flagship release has come not in the form of an ultra-standard game like blackjack or roulette (not that there’s anything wrong with those timeless games), but of the currently trending Indian game of Teen Patti. 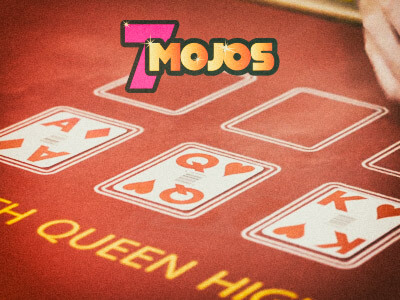 The unofficial game of India, Teen Patti has been wildly popular on the Subcontinent for generations.

The name of the game translated simply to “three cards” in English. It traces its origins to the British game “Three Card Brag,” which in turn has its roots in poker… which is why Western players find it so easy to learn and enjoy. It only takes a few minutes to learn, but (like poker) can take a very long time indeed to master!

Winning in the traditional game demands that players try to outmaneuver each-other to win a shared pot, like in poker, but this “face off” version shares more in common with “bet on poker” titles. Instead of trying to beat out opponents, players here can bet on one of two hands to win.

In our opinion, this takes an already exciting game to the next level.

The bet is placed on the results of a 3-card poker round. The best hand will win, but the player’s goal isn’t to beat their opponent (as it would be in ‘normal’ Teen Patti game), but to place their bets on the winning side. Wagers can be placed on the hands of “Player A” or “Player B,” and the simple ‘standard bet’ pays 0.95:1.

There are also a series of side bets available that are less likely to hit, but pay higher when they do so. These include the ‘pair plus player’ bets, where the royal flush bet pays 100:1, and the ‘3+3 Bonus,’ which offers the extremely exciting top payout of 1000x.

In terms of visual design, this title offers an appealing combination of traditional Western live dealer games with an Indian twist. The streaming site (based in Bulgaria, of course) shows other gaming tables in the background, enhancing the feeling of playing at a land-based casino from the comfort of your own home. With that said, the decor is distinctly Subcontinental, with an emphasis placed on lotuses, red and purple colors, even what look like saris and henna tattoos for the dealers!

All in all, this title offers a major contribution to the modern live dealer game space.

The one downside of 7Mojos’ relatively recent appearance on the scene is that its titles aren’t available on as many casinos than players might expect from industry titans like NetEnt, Evolution, or Playtech…

Still, there are some great options available for players all over the world… and we expect the list will grow considerably over the coming months and years.

One option with a very good reputation is SapphireBet, which is currently offering some rock solid bonuses.

You can also find many of their games at 888Starz, a very popular choice, as well as Bets.io Casino.