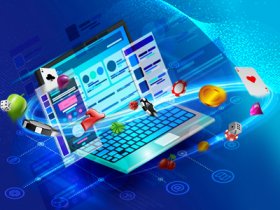 Nothing compares to playing Live Dealer games. Even the most advanced RNG titles cannot provide a truly immersive environment nor can they offer glitz and glamour of the Strip.

Compelling and mesmerizing, Live Casino has revolutionized the entire world of entertainment wiping out all existing distances and borders. Fabulous Vegas has never been closer, only now it’s literally at your fingertips brimming brightly with a never-before-seen range of roulette, blackjack, poker, baccarat, and other table games.

… to find a decent gambling site able to make full use of ground-breaking technologies and numerous benefits. Even though plenty of things such as licensing, banking, customer support are very important for a seamless experience, the crucial role of Live Dealer software providers is hard to overestimate. The best of them are those that have reached the highest level in stream quality, croupier competence, and portfolio diversity.

Who Are The Top Online Live Dealer Software Providers & Why?

You’d be surprised how many companies exist within this relatively new sector of iGaming. There are names the majority of patrons have never heard of – some of them are too small or narrowly oriented on a certain market while others (Global Gaming Labs or formerly UK-licensed Smart Live Gaming, for instance) just don’t operate any longer.

Well, let’s switch to big players and focus on crème de la crème of the Live Casino world, at the same time answering the question: Why them and not others? It’s no exaggeration to say that this Swedish brand is the gold standard everyone across the industry is trying to emulate. Second to none, Evolution Gaming boasts an immense range of games, as well as the best quality of streaming and full mobile optimization that provide for top-notch performances even under slower connection speeds.

Founded in 2006, the company has always been dedicated to Live gaming solutions solely, starting to supply such large operators as William Hill, Bet-at-home, Ladbrokes, and 888 in its three initial years. Licensed in numerous reputable jurisdictions, Evolution was the first to enter Italy, Spain, and Denmark, and to get an approval for New Jersey, USA.

Increasing the gap to competitors…

…has always been Evo’s eternal mission, and it’s safe to say, these guys are really good at implementing the goals. Today, the company has a solid network of state-of-the-art studios across Europe, Canada, and the USA with the three main hubs located in Latvia, Malta, and Georgia providing over 700 Live tables alone. In addition to that, the brand operates a number of tables built at
the premises of luxurious land-based casinos in the UK, Malta, Romania, and the United States.

In terms of games, no need to lower your sights as there’s something for everyone, from universally popular Ultimate Texas Hold’em to engaging Game Shows such as Monopoly Live and Mega Ball. The selection of Live Roulette is huge and goes far beyond just American, European and French variants, offering over a dozen titles including electrifying Lightning experience.

The opening of Playtech’s 8,500 sq.m. studio in Riga in 2017 became a huge event in every sense of this word. Not only did it dwarf the great bulk of rival facilities but it also significantly expanded the company’s customer base, taking over the majority of European operations. The brand’s other studios are located in Spain, Belgium, Romania, and the Philippines, the latter caters to the rapidly growing Asian market.

…in many segments of iGaming, Playtech offers a ground-breaking platform powered by the latest data-driven technology and enhanced with a dynamic user interface for the ultimate personalized experience. The quality of HD streaming is off-the-charts while the assortment of games is one of the most diverse on the market, with new releases being added on a regular basis.

Once you choose to play at Live Casino provided by this Isle Of Man-headquartered firm since 2003, you can enjoy the lofty buzz of numerous baccarat, roulette, and blackjack tables run by stunning dealers. To poke out of the crowd, besides Casino Hold’em and other classics, Playtech lets users benefit from the unique content including Exciting Baccarat Squeeze, Prestige Roulette Lite, as well as All Bets Blackjack enriched with a series of side bets. By the way, the brand was among the first developers to introduce Live slots.

For some reason, NetEnt expressed interest in Live Casino much later than it was expected from the Swedish legend founded in 1996, introducing its first products only in 2013. Despite a delayed start, the brand has managed to catch up with the strong competition, showing the world it can succeed at everything it tries.

Net Entertainment currently holds licenses and product certifications in many regulated markets including Spain, Mexico, Italy, as well as New Jersey and Pennsylvania but the UK remains its largest domain. As for North America, Canadian punters from British Columbia can also enjoy the brand’s Live roulette and Live blackjack streamed from the studio in Malta.

Yes, you read it write…

…the choice of games is still limited to the two aforementioned types, which is the only minor drawback in the whole story. On the bright side, the recently launched Auto-roulette studio lets players choose between 3 different wheels in one place: Classic Auto-Roulette, Rapid Auto-Roulette, and VIP Auto-Roulette while 21 buffs can try their strategies (do not bet on card counting, please!) at Live Blitz Blackjack with variants for low- and high-rollers and Live Perfect Blackjack, which is the only one in the world to offer Blackjack on autoplay.

NetEnt’s portfolio, which has been perfected over the past several years, is available in 25 languages and currencies featuring an easy-to-use interface, seamless graphics and sound, and a set of customization opportunities. The brand is also famous for its exclusive tailored solutions such as Live Beyond Live that was developed for Mr Green. Standing out of the crowd by offering demo play, Vivo Gaming can brag of a solid product range that comprises Live roulette (European and American), blackjack, baccarat, Casino Hold’em, Caribbean Stud, craps, Dragon Tiger, Sic Bo, and Live Bingo. The games are broadcasted 24/7 from multiple locations: the company’s studios in Bulgaria, Uruguay, Philippines, and Georgia, as well as from the authentic atmosphere of fashionable Portomaso, Oracle, and Princess casinos.

…the high quality of streaming accessible on a wide variety of devices, from Android and iOS mobile phones to Mac and Windows desktop computers. UI is available in 26 languages while friendly croupiers perfectly speak English, Chinese, Spanish, Turkish, and Portuguese. Vivo’s tables can be found across an array of online casinos including 1xBet where it has a dedicated studio.

Since its inception in 2013, Ezugi has been doing a great job, positioning itself as a boutique Live Dealer supplier for emerging markets. The company’s focus on the OTT (Over The Table) solutions brought to life in collaboration with land-based casinos has not gone unnoticed not only by players but also by rivals. At the beginning of 2019, the firm was acquired by Evolution Gaming but, fortunately, retained its autonomy continuing to work as an independent brand within the Group.