On the Gambling Scene: Robert Kraft 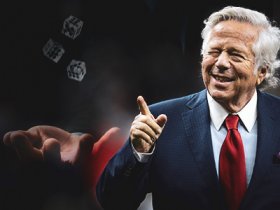 In the world of online casino gaming, there are some names everyone knows…

… and some who prefer to remain behind the scenes.

For every celebrity gambler whose antics are followed by millions, there is tastemaker waiting in the wings. Though they may not have a truly household name, they sometimes have even more power and influence from their position just outside of the spotlight.

Robert Kraft – billionaire, investor, businessman, and sports owner extraordinaire – is one such person.

For nearly three full generations, he has been associated with tremendous success in business and sports as chairman and CEO of the Kraft Group, as well as the owner of the New England Patriots, which he bought for $172 million in 1994. They then embarked on one of the most dominant stretches of any sports team int he modern era, racking up Super Bowl wins in 2002, 2004, 2005, 2015, 2017, and 2019. The team’s current value is estimated at around $5 billion.

It’s not Kraft’s only major investment, however… far from it. In addition to ownership of the Patriots, he also owns Major League Soccer’s New England Revolution, as well as the Boston Uprising, New England’s first eSports team.

And that’s not all. Kraft has bet big on the legalization and profitability of eSports and Sportsbetting. What have his moves been so far, and what might they tell us about the future intersection of casino play and sport?

Top 4 Casinos We Recommend to Try

Like it or not, sports have been associated with betting for as long as there have been sports.

While gambling on professional sports has long been illegal in most Western markets, illegal or semi-legal gambling has never been far from common practice. This has given birth to such massive affairs as the Black Sox Scandal, where the Chicago White Sox were accused of throwing the 1919 World Series in exchange for hefty payments from a gambling syndicate led by the mobster Arnold Rothstein. It was rumored to play a part in Michael Jordan’s surprise ”retirement” from the NBA while still at the peak of his powers.

But these days, changing regulations have legalized betting on professional sports in some areas. Rebranded as sportsbook, this form of betting has been an absolute gold rush for early adapters and their financial backers.

Furthermore, there’s a brand-new application of sports and betting that could only bloom in the soil of modern technology and culture…

Taking advantage of the fact that millions of (young) people now take pleasure in watching others game via streaming services – often generating massive revenues for those actually playing – some savvy investors and platform designers now see to eSports as the wave of the future.

Soon, as many people will gather to watch famous streamers game as currently watch the Super Bowl! And those who get their first will be able to enjoy the fruits of these new gaming structures, whether they are in the form of ad revenue, legal betting, subscriptions services, or some other form of monetization.

Plenty of wealthy celebrities who share in this vision have put their money where their figurative mouth is: Mark Cuban, Ashton Kutcher, and Jerry Jones among them.

And Kraft has joined in the fun! 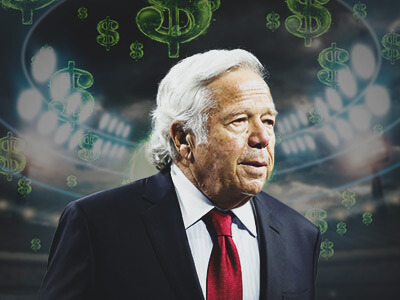 Even as the legal framework of the Sportsbook and eSports future continues to take shape, Kraft has placed himself among the biggest investors in this vision of what comes next.

Kraft has invested heavily in Boom Entertainment, fast-moving company dedicated to redefining what real-money gaming looks like. Though not yet a household name, they recently enjoyed a successful round of Series A funding, led by Sands Capital.

This is far from the only big step he’s taken, however!

In buying the Boston Uprising, Kraft has made another big bet in support of eSports. The team currently competes in the Esports Overwatch league, created by gaming titan Blizzard. If and when this part of the industry expands, the New England Patriots owner will stand to profit handsomely.

Furthermore, Kraft has put significant resources towards the political effort legalize sports gambling in his home state of Massachusetts. He points out that residents of neighboring New Hampshire can wager legally on sports, and that it makes little sense from a fiscal perspective for one US State to allow a neighboring state the regulatory power (and associated tax revenue) for its own residents to lay bets, rather staking the claim itself.

All in all, it’s clear that this billionaire investor and influencer has a clear vision for the future…

… and that vision includes an expanded role for legal sports gambling.

Whether it takes the form of eSports, Sportsbook wagers, or fully legal gambling of every kind, Robert Kraft has bet heavily that the intersection of gaming and wagering will be the center of the action in the years to come.

And if his past predictions are any indicator, it seems like this bet is likely to pay out handsomely!

Perhaps players should starting laying preparations for this future today.