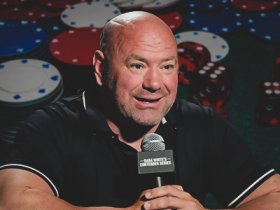 All kinds of personalities are drawn to casino gambling.

This diversity is part of what makes the gaming experience so exciting! You never know who will sit down at the seat next to you.

This is true of celebrities who love to bet as well. For every Ben Affleck, zaddy type who cleans up at the tables time after time, there’s a beautiful mess like Paris Hilton getting tossed from casino floors for drug possession! But in the wide, wide world of gambling…

The President of the Ultimate Fighting Championship (UFC), White is something of a legend. Perhaps more than any other individual, he has personified the explosive growth of Mixed Martial Arts (MMA) – both in the culture at large, and a business.

In 2001, White was part of the deal that (along with buyers Station Casinos executives Frank and Lorenzo Fertita) acquired the UFC for $2 million.

At the time, the league was in dire straits. Despite having successfully produced nearly 30 fights, government regulators had cracked down on the “no holds barred” style of the early MMA fights. Money was tight, and the UFC had a lot of bad press.

For those keeping score at home, that’s a return on investment of 2,000%in just 15 years.

Dana White played a central part in that success. In addition to his status as champion businessman, he is also a media personality in his own right: loud, brash, opinionated, his personal style of communication is (rightly) closely associated with the UFC brand. And wouldn’t you know it, he is a downright hellacious gambler.

The UFC is headquartered in Las Vegas, providing all kinds of gambling opportunities. What’s more, with personal net worth is currently estimated at north of $500 million, Dana White certainly has a bankroll with which to enjoy his interest in wagering.

For some, this would be the beginning of a sad story where a successful individual gets addicted to gambling, and watches their world begin to crumble. But in White’s case, exactly the opposite seems to be true!

So what is his gambling story? 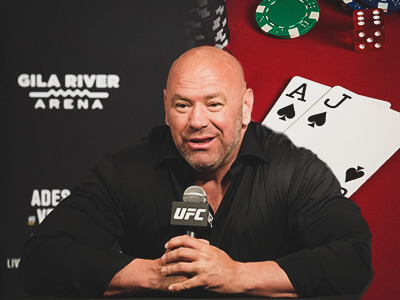 Amazingly enough, White’s overwhelming business success has translated quite well into gambling success! His game of choice seems to be high-stakes blackjack.

He owns the rare distinction of having been banned from the same casino for winning too much money not once but twice.

The house in question was the Palms Casino Resort in Las Vegas. White favored this location and liked to play blackjack at the astronomical minimum bet of $25,000 per hand. After winning millions over several months, he asked by the ownership to play at the $5,000 minimum bet tables instead. When he declined, he was told to take his business elsewhere.

That’s when it gets extraordinary. After a couple of years, new ownership took over the Palms. As White is a prominent figure on the Las Vegas (and national) scene, he was invited back to play at his previously favored stakes.

White obliged, and promptly won millions more (it’s rumored that he once won $7 million in a single night!). After paying up, the new owners repeated the choice of their predecessors, and asked him not to return.

But it must be said: the new ownership did add a touch of very handsome touch of class. In a nod to UFC tradition, the Palms gifted White with a golden championship belt. It’s inscribed with the text “undisputed blackjack champion” with “1.8 million in winnings.” (see image here)

In typical White fashion, he responded on social media with a photo of the belt and the caption: “what a cool way to say get the f••• out of our casino and don’t come back.” 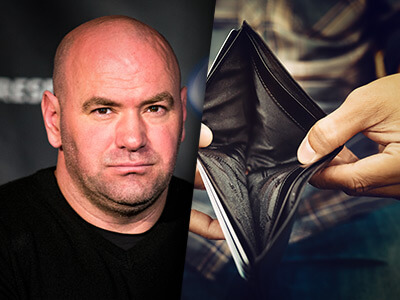 It’s not as though White has never suffered a loss at the tables, however. He famously lost $1 million on a single bet! He detests sportsbook betting to this day as a result.

Best tipper in the industry? No Contest

One more thing that gamblers should know about White: not only is he a legendary gambler, he’s also a legendary tipper!

Part of the reason his twice-banned-from-the-Palms status made such news is that it angered so many dealers! “He changed people’s lives,” one source said, adding that White would sometimes tip dealers more than $100,000.

And this behavior is not restricted to dealers… it includes waitstaff as well. Supposedly, it’s not uncommon for him to tip $10,000 on a $10,000 check. This is the type of customers that service staff dream of! His legend grows.