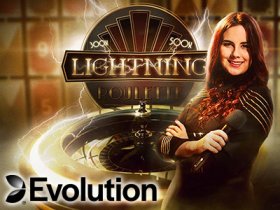 Evolution Gaming, expert developer of casino content, has reached a deal with Scientific Games to optimize its Lightning Roulette release for a land-based environment.

The recent deal between the two brands will see Lightning Roulette live wheel available from Scientific to land-based providers worldwide. It will be a premium Evolution game, different than the Dual Play Roulette and Baccarat titles that are broadcasted from land-based tables, to switch from live to land-based mode.

More About the Variant

Lightning Roulette was introduced in 2018 and has already earned several recognitions for Product Innovation of the Year at the Global Gaming Awards, and EGR’s Game of the Year. The game features a standard Roulette wheel in an impressive TV game style that connects live and advanced RNG elements of gameplay. As part of the classic Roulette play, Lightning Roulette delivers high-payout RNG ‘Lucky Number’ wins in each game round. It also stands out with lightning strikes that brighten numbers for multiplied wins on the catchy digital backdrop fused into the game setting.

Evolution and Scientific Games have a long-standing cooperation across several markets in Canada, Europe, and United States.

Reacting to the terms of the new deal, Chief Product Officer at Evolution, Todd Haushalter, mentioned:

“Lightning Roulette has been the biggest table game in online casino for years and we are thrilled to have Scientific Games bring it to land-based casinos. This gets us one step closer to letting players find Lightning Roulette everywhere they want to play.”

Haushalter also said that Evolution already has a significant customer base and millions of interested users who relish the game.

“We have watched Lightning Roulette’s phenomenal success in a live-dealer, online format and cannot wait to make it available on the gaming floors of land-based casinos across North America and around the world.”

According to Bone, Lightning Roulette is going to be one of the most captivating and entertaining live products thanks to its splendid features and high-win potential. The game introduces a unique roulette experience for players and the company is looking forward to its debut.