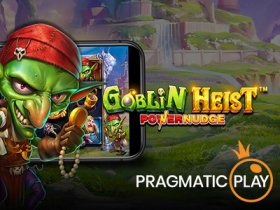 Pragmatic Play, a top-notch provider of casino games, invites players to visit the world of the kingdom in the new game, Goblin Heist PowerNudge™.

The action of the new game takes place in a realm filled with treasure-craving creatures in a hunt for wins worth up to 4,000x the wager. The PowerNudge™ tool is activated with each winning combo, letting the participating reels nudge a position down, forming opportunities for more wins.

While playing the online casino game, you will see different symbols on the way including a skull, a scroll, and a horn filling the bottom end of the paytable. The high-paying elements are shown in the form of a goblin, a knight, and dynamite appearing as the goblin’s head.

The game also includes a golden lion Mystery Money element in the main game, and if you land 6 or more at the identical time, the Money Respin feature is triggered.

During this bonus feature, the lion icons randomly release cash values and multipliers to include in any gathered wins. The grid will move on with nudging until all the Mystery Money symbols have vanished from the screen.

In certain markets, players can use the Buy Bonus Spins feature to enter straight to the bonus round, for 100x their wager.

Goblin Heist PowerNudge™ is yet another addition from Pragmatic Play that has recently added Fire Strike 2, North Guardians, and Spirit of Adventure. The company already has more than 200 games in its portfolio, and adds up to five slots every month.

“We’re thrilled to bring back the PowerNudge™ mechanic in an entirely new playing environment, putting players at the heart of the action with a gaming experience that adds an extra layer of immersion and anticipation as the reels shift.

“Goblin Heist PowerNudge™ offerscrisp visuals, a captivating theme, and intuitive sound effects, as well as a progressive feature that really stirs up the excitement.”

Pragmatic Play has just made a €30,000 donation to Malta’s Majjistral Nature and History Park. The company will be focused on planting several seedlings to keep the park’s longevity in the next three years.

Majjistral Nature and History Park is the first natural national park in Malta, located in the northwest of the iGaming hub, which involves the coastal area from Golden Bay to Il-Prajjet and ix- Xagħra l-Ħamra.