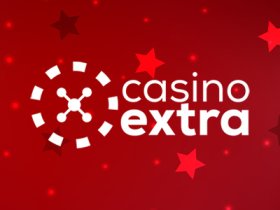 Casino Extra invites you to keep unwrapping New Year’s gifts. As part of the Holly Jolly Drop promotion, you can enjoy three phases of celebrations with a total of €200,000 in prize pools. Enter the “Mission Mistletoe,” “Twinkling Tournament” and “Holly Jolly Prize Drop” stages to get the most out of the offer!

If you haven’t joined the first two stages at Casino Extra, you still have time for the third phase of this spectacular promotion.

As a reminder, the first stage “Mission Mistletoe” includes a total prize pool of €60,000 in prizes if you were successful in unlocking certain tasks. This phase was available from the 9th to the 15th of December.

The second phase was available from the 16th to the 22nd of December, “Twinkling Tournament,” where players competed against other users for a place on the leaderboard with an opportunity to claim a prize from a total pool of €60,000!

There is another phase of the promotion, “Holly Jolly Prize Drop,” with a random prize from the total pool of €80,000 which can be triggered at any point. This part is running from the 23rd of December to the 2nd of January!

Before taking part in the third stage of the promotion, you want to know the following terms and conditions of the offer: