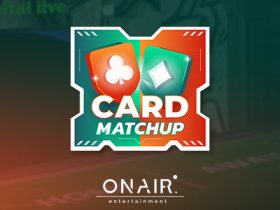 On Air Entertainment, one of the newest suppliers to enter the live dealer games industry, has announced the further expansion of its live casino portfolio with the launch of Card Matchup.

The new live table game has a sports theme and it will be made available to all casinos that have a partnership with OnAir Entertainment on November 10, 2022. Card Matchup is similar to sports betting in a way, because players will have to bet on who will win the upcoming matchup.

The matchup is won by whichever side draws the highest card, while the visuals of the game will be spiced up with animations and statistics available on screen before each draw. The statistics include percentages of all bets placed, historical results and winning streak.

Card Matchup can be played by an unlimited number of online players and it will feature a customizable color palette for the user interface, allowing casino operators to use their own branding on the game.

Speaking about the new live casino title, Armands Zalitis, Head of Product at OnAir Entertainment, described it as “a dynamic sports-themed game” and added that the product is “remarkable” as it offers a tailored experience to the company’s clients.

OnAir Entertainment launched just ten months ago and since then it has managed to enter ten regulated markets, including the Isle of Man, the United Kingdom, Greece, Ontario, Latvia, Sweden, Denmark, the Netherlands and Malta.

Along with releasing new titles, OnAir Entertainment is also constantly looking to expand its production capabilities. The company has recently announced that it plans to open a brand new live casino studio in Spain in 2023, featuring multiple roulette tables, including two Standard Roulette, one Auto Roulette, and one table for the upcoming Nexus Roulette.

The company is also building a huge new live casino studio in the Georgian capital of Tbilisi. The facility will have no less than four floors and 130 tables and will be run by a team of approximately 1,700 employees. The Georgian studio is expected to open in the first quarter of 2023.

This will be the third studio owned and operated by On Air Entertainment, taking the company’s total streaming capacity to 220 tables. Earlier this year the company announced that it was working on a new studio with 30 tables in Bucharest, the capital of Romania, and that the facility would be ready to operate by the end of 2022.