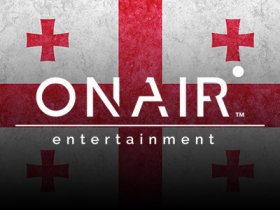 On Air Entertainment, one of the newest suppliers to enter the live dealer games industry, has announced that its presence will be significantly boosted in 2023 as the company will launch a brand new live casino studio.

The new facility will have no less than four floors and 130 tables and will be run by a team of approximately 1,700 employees. The studio is located in the Georgian capital of Tbilisi and On Air Entertainment expects to open it in the first quarter of 2023.

The new live casino studio will have tables set up for Blackjack and Roulette, with backgrounds that have been designed to recreate the atmosphere of a busy land-based casino floor. The facility will also benefit from the latest high-definition cameras and state of the art microphones.

This will be the third studio owned and operated by On Air Entertainment, taking the company’s total streaming capacity to 220 tables. Earlier this summer the company announced that it was working on a new studio with 30 tables in Bucharest, the capital of Romania, and that the facility would be ready to operate by the end of 2022.

On Air Entertainment entered the live casino market in 2021 when it launched its very first blackjack table. Since then, the supplier has added Standard Roulette to its portfolio, along with speed roulette. Moreover, in August and September the supplier will launch two brand new live casino titles: Auto Roulette and then 9 Pots of Gold StreamIcon Edition.

Speaking about the company’s bold expansion plans, Mathijs Beugelink, Head of Operations at OnAir Entertainment, revealed that the ultimate goal for the supplier is to “become the go-to provider for premium live casino content.”

The executive also revealed that the company has “an ambitious roadmap for new studio launches” as it is looking to boost its portfolio and secure new partnerships with casino operators.

About the new Georgia studio, Mathijs Beugelink added that it will bring many jobs to Tbilisi and described it as “a significant milestone for OnAir Entertainment and for the operators that we work with.”

Vasileios Martharis was appointed as Head of Studio for the new facility and said that the studio in Tbilisi ”will be one of the most advanced in the industry”, allowing On Air Entertainment to strengthen its position in the market.

The On Air Entertainment network is certified in key regulated markets including the Isle of Man, the United Kingdom, Denmark, the Netherlands, Greece, Ontario, Latvia, Sweden, Romania, Italy and Malta.