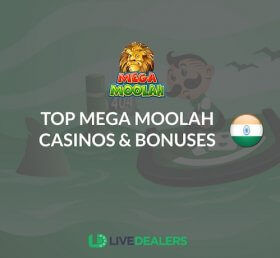 Online slot games don’t come much bigger or more famous than Microgaming’s Mega Moolah. The slot holds the record for the biggest ever progressive jackpot prize paid out at an online casino.

Moreover, Mega Moolah continues to make the headlines today, twelve years after its initial release. It won’t surprise you to learn that the global slot is one of the most played games at Indian online casinos.

10Cric is the rebranded BetRally – a highly successful and popular online gambling site for players in India. They offer an amazing selection of betting markets, a great RNG casino and also a live dealer casino with games from Evolution Gaming.

That’s not the main selling point for the brand though – their payment gateway is. You can deposit using a local bank account by simply going to the live chat and asking them for an instant bank transfer deposit option. Haven’t seen any other site in the market do this!

Indian players will find Casumo one of the most mobile-friendly domains they can come across. It is armed with a host of Microgaming titles, and Mega Moolah is best paying of the lot. To help players build up a sizeable balance for tackling Mega Moolah, Casumo offers newbies a welcome bonus.

Any new player can claim a 100% match on their first deposit. This can double their funds up to ₹50,000 in all.  This tidy welcome offer comes with reasonable 50x wagering requirements. Slots such as Mega Moolah count 100% towards the fulfilment of the playthrough rate.

Indian players can start depositing at Casumo today using MasterCard, VISA, Paysafecard, Skrill or Neteller. If they manage to bag a progressive prize, players will get to keep the entirety of it. Casumo charges no hidden fees for cashing out any winnings.

Cosmo Casino provides players with ample chances to become millionaires. Not only does this Indian-friendly casino offer Mega Moolah, it also features the game in its welcome bonus. The expression of killing two birds with one stone certainly rings true at Cosmo Casino.

After registering as a new player at Cosmo Casino, players are invited to claim a welcome offer. This bonus is granted as soon as $10 is deposited. Immediately, players will get 150 chances to try and become a multi-millionaire on the Mega Moolah slot. These chances are essentially free spins on Microgaming’s award-winning game. Go one step further and make another deposit, and you’ll land more chances to win on the game. These bonuses come with hefty 200x playthrough rates.

Cosmo Casino accepts deposits from Indian players using VISA, MasterCard, Neteller, Paysafecard, Skrill, VISA Electron and Ilixium. Instant bank transfers are also permitted. Withdrawals must be worth $50. Cashouts are subjected to $35 fees when using direct bank transfers (DBT). This fee rises to $70 if you have winnings of over $3,000. Other cash out options are free of charge.

Indian players who fancy their chances of winning at Mega Moolah may wish to play at Luxury Casino. A high-rollers paradise, many big-money games can be found there, including Mega Moolah. To help get you started, Luxury Casino offers bonuses on your first five deposits.

The Indian rupee currency is not accepted at Luxury Casino, so players will likely to use the US dollar instead. VISA, MasterCard, Neteller, Paysafecard, Skrill, VISA Electron and Ilixium are accepted banking options.

Luxury Casino has the same cash out terms and conditions as those found at Cosmo Casino. In short, all deposit methods are free of charge, save for DBTs.

A legendary Microgaming casino, Quatro Casino is open to players based in India. Being a leading and historical Microgaming site, it can also dish big Mega Moolah wins. Players can start playing Mega Moolah in style at this casino, with a match deposit bonus and free spins offered. Any Indian new casino player can claim the bonus, which works as follows:

Players are entitled to claim a first deposit bonus which is worth up to $100. They will also net 100 free spins per day, over their first seven days as a new player. None of those free spins are valid on Mega Moolah but do still offer the chance to win real funds.

Those funds could then be used to play the African safari-themed progressive jackpot slot. Wagering conditions for this bonus are set to 30x the bonus received.

Quatro Casino players can deposit using bank transfers, Ilixium, MasterCard, Neteller, Paysafecard, Skrill or VISA. Win millions on the game, and you should be able to take home your winnings without charges. That is unless you choose to cash out with DBTs, once more.

Rizk Casino is one of the major Indian online casinos to accept the Indian rupee currency. It also provides Mega Moolah to fans, and isn’t shy about offering bonuses in rupees, either. If you need a helping hand to play Microgaming’s progressive jackpot slots, Rizk Casino is there to assist.

Opt to sign-up and play at Rizk Casino as a new Indian player, and you can claim a 100% match. This can double a ₹10,000 deposit to the sum of ₹20,000. It also comes with 50 free spins on top games for you to enjoy. Deposits must be worth at least ₹1,000 and come with 40x wagering requirements.

Maximum bets of ₹500 per spin can be wagered using Rizk Casino’s bonus funds on Mega Moolah. However, as there are several progressive prizes to win, this is certainly not an issue. Skrill and Neteller deposits are not valid for claiming the offer.

If you’re able to land a big win on Mega Moolah, you can cash out your winnings via a few options. Bank transfers, MasterCard, Neteller, Skrill and VISA, are all accepted. There are no fees applied, and withdrawal limits range from ₹1,600 up to ₹400,000. The latter is raised to ₹4,000,000 when using bank transfers.

Launched in 2007, there is no bigger or better paying progressive jackpot slot than Mega Moolah. The game is still as popular in 2019 as it was twelve years ago.

Mega Moolah is themed on African savannah wildlife. It can be found at all leading Indian casinos which offer Microgaming slots. It has also paid out billions of rupees since it went live.

Game Concept & How to Play

Mega Moolah hasn’t changed at all since it debuted in 2007. Amazingly enough, it hasn’t aged too badly, either. This has no doubt helped the game remain a firm favourite with Indian casino players across the net.

The African savannah-themed slot is one of the cheaper progressive titles you can find online. All 25 paylines in the slot are adjustable. So, too, are the coin values and the coin denominations in the release. Even when playing at a casino which accepts Indian rupees, the game will feature alternative currency options. A spin will cost 0.01 credits per line at its cheapest, and 6.25 credits with all lines active at its costliest.

The lion is the key symbol in this game. It takes on the mantle of a wild and can substitute for any symbols save for scatters. Moreover, it will double the value of any win it appears in.

Scatters appear as what are seemingly purple monkeys. Three, four or five showing up anywhere on the screen will trigger a free spin round. This offers Indian players 15 free games. Again, a multiplier is in play. This time, anything won in the round is tripled.

Unlike some other progressives, players aren’t required to land a winning combo to win a progressive prize. Instead, Mega Moolah pays out its jackpot prizes at random. The more you wager each time, the more likely you are to trigger the feature. Once it begins, players can spin a money wheel. A pointer will determine the exact progressive prize which has been won, as there are four of them.

In order of the least valuable, there are Mini, Minor, Major and Mega Jackpot prizes at stake. These typically have starting values of approximately, ₹700, ₹7,000, ₹700,000 and ₹71,000,000, respectively. Bear in mind that the progressive jackpot network uses the USD as its currency of choice. The prizes, when converted into rupees will, therefore, vary.

Mega Moolah: Isis – This variant is themed on Ancient Egypt. The game is quite like the original, except that it can offer a larger number of free spins. Moreover, the free spin bonus provides 6x multipliers instead of 3x. This prosperity costs, though, and Mega Moolah: Isis is pricier than its predecessor. The progressive prizes are the same as Mega Moolah.

Mega Moolah: Summertime – This release is a more refreshing take on the slot. Just 9 paylines appear this time, with fruit and summer symbols on the reels. Stakes are relatively the same as the original, with the same progressive prizes winnable. Wild multipliers can boost wins, and the free spin bonus offers 15 games with 3x multipliers.

Mega Moolah: 5-Reel Drive – The final variant features just 15 lines over 5 reels. Wild symbols do not appear on all the slot’s reels in this release. However, the free spin round offers 10 free games with 5x multipliers. This game also provides the same progressives and themes itself on trucks and motorcars.

All four Mega Moolah games feature the same progressive prizes, as they all run on the same network. The jackpots are all won at random. If a player wins a progressive reward on one of these games (any of them), it disappears from all the others. Therefore, it doesn’t matter which game you choose to play. You can win the same cash on all of them.

It is theoretically possible to win the top progressive prize with a minimum stake. However, often, you will only win the smaller progressives when the bonus is triggered. You’ll be in pole position to win the top prizes by placing sizeable stakes. To help you do that, it may be worth claiming a casino welcome bonus.  Ensure that before you do that, you check out the wagering requirements of any such offer. If you win a prize, you will not be able to withdraw it until those requirements are met. The smaller they are, the quicker you can cash out your winnings.

Mega Moolah is one of those games which can be played for free. This is worth considering. You won’t be able to win real moolah, but you can get a bit of practice in. You should be able to guestimate how frequently the slot pays out and practice budget management in this manner.

There are four variants, and each has its own RTP (return to player rate) and volatility level. Free play all four games before deciding which one is best for you. Players who want to play for epic sums of cash are advised to wait. The default value of the top prize is $1,000,000 (₹71,000,000) but will be much higher later if it remains unwon.

There have been many big winners on the Mega Moolah slot. In total, the game has paid out over billions of Indian rupees in cash prizes in its twelve-year history. Just shy of 700 jackpot prizes have been won. Last year alone, a total of ₹3,564,947,620 was paid out to players. The average win in 2018 was worth ₹509,278,231 and was paid out approximately every 37 days.

To date, the record win on the Mega Moolah slot occurred in September 2018. One lucky player managed to scoop a win worth ₹1,481,550,618 at Grand Mondial. This easily eclipsed the previous record, which was set a few years earlier at Betway Casino. Back then, Jon Heywood won ₹1,172,403,607 on the game.

As you can see, winning life-changing sums of cash on Mega Moolah is very much possible. If a tiny chance, but a huge prize is your your cup of tea, Mega Moolah is the way to go.