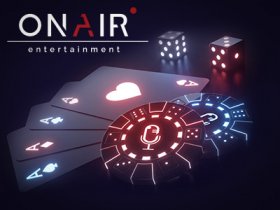 On Air Entertainment, a gaming company that was founded just one year ago, has announced the launch of its very first live casino title and affirmed its intentions to shake up the industry in the coming months.

The company was founded in December 2020 with the aim of developing fresh content for the live casino industry, and just one year later they managed to present their first game.

This live blackjack game boasts the “Deal Now” feature, which allows players to make the game’s betting phase as short as possible, while with “Pre-Decisions” they will be able to decide on their actions before their turn actually comes.

The game also offers side bets like “Perfect Pairs” and “21+3”, which bring chances to win up to 100 times the bet. The developer also announced that more extra features will be coming to the game soon, including “Multiple Seat” and “Bet Behind”.

The company’s studio is located in Riga, Latvia, and it is a brand new state-of-the-art facility, with ten English-language blackjack tables fully operational at the moment. More tables are lined up to be added in the studio as On Air Entertainment plans to have 20 tables live before the end of the year.

Along with its features that should enchant the players, On Air Entertainment also promises to make life easier for its operator partners, ensuring easy game integration with no hidden fees.

In the near future On Air Entertainment will add gaming tables in more languages, while in February 2022 the company expects to premiere its very first live roulette game. Moreover, in the coming months the developer plans to reach more regulated markets as it currently is licensed in Malta, Isle of Man and Latvia.

On Air Entertainment currently has offices in Latvia, Estonia, Poland and Malta, employing a team of 200 people. The company is currently in the process of recruiting more staff, including skilled game presenters and shufflers.