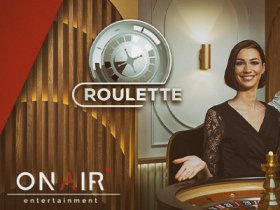 On Air Entertainment, the new company that is trying to make a name for itself on the live casino market has announced the launch of Standard Roulette, the second title in its portfolio of live dealer games.

The live dealer game offered by On Air Entertainment is based on the rules of European roulette and it’s broadcast from the company’s modern studio located in Riga, Latvia. The tables offer support for over 20 languages and the broadcast itself benefits from multiple camera angles, attempting to offer a real-life gaming experience.

Standard Roulette also offers dynamic scaling, which means the game can be enjoyed on any kind of device, from desktop computers to tablets and mobile phones as the interface adjusts automatically to the screen size.

The game also comes with detailed statistics, giving players the opportunity to check the last 500 results, see which are the hot and cold numbers and also have an accurate view of hit percentages.

Speaking about the launch of Standard Roulette, Armands Zalitis, Head of Product at On Air Entertainment, said: “We are thrilled to be releasing our second game, Standard Roulette, even though it feels like Standard Blackjack only came out yesterday!”

The company’s first ever live dealer game, Standard Blackjack, was launched in November 2021 and it has gained popularity quite rapidly after its launch. In fact, the game is already included in the offering of several online casinos in the United Kingdom and will reach more and more jurisdictions in the near future.

Since the launch of Standard Blackjack,On Air Entertainment has more than doubled its team and now it exceeds 500 employees as the studio gets ready to launch more and more products. The next in line is Auto Roulette, scheduled to launch this spring.

Standard Blackjack, which was launched in November 2021, is a classic card game that comes with a player-first focus, providing non-stop streaming 24 hours a day, seven days a week. This live blackjack game boasts the “Deal Now” feature, which allows players to make the game’s betting phase as short as possible, while with “Pre-Decisions” they will be able to decide on their actions before their turn actually comes.