When it comes to playing roulette most people will be familiar with the idea of there being the classic French version of the game. For those of you researching playing live online roulette with live dealers, there are a few variations of the game for you to choose from.

Each has its own stamp of character and flare, with differences in rules, betting, as well with the interface and table layout. We’ve put together this simple guide to help you understand American roulette, especially when compared with the French and European variations of the game.

A Brief History of American Roulette

Roulette has been around as a game for centuries, first being created accidentally by French mathematician Blaise Pascal in 1655 when he was attempting to develop a perpetual-motion device. The ‘little wheel’ as roulette means in French, soon became a popular game and was later moved to become part of the first casino in Monte Carlo by the Blanc brothers, who developed what has since become known as French roulette.

American roulette came about through the impact of French immigrants in New Orleans and other parts of Louisiana at the end of the 18th century. The problem was, that roulette wasn’t welcomed quite as warmly in Louisiana as it had been back in France because of the low house edge. To create a difference, American roulette was developed with the addition of another zero to the wheel.

In modern day American roulette the double zero remains, but you’ll also find that the numbers differ to the European and French versions of the game. These changes date back to near the beginning of roulette being available in America, with the game becoming ever more popular on the casino riverboats of the day and gambling halls across the region.

These days, real life American casinos push American roulette over the European counterpart, with bets restricted on European and French roulette from counting towards bonus specifications and loyalty points in some cases for both physical and online casinos. Where you do find European roulette in casinos, they are often restricted to high betting minimums and VIP sections. It has meant that to the everyday American gambler, the American version is the only type of roulette they’ve really had a chance to play. 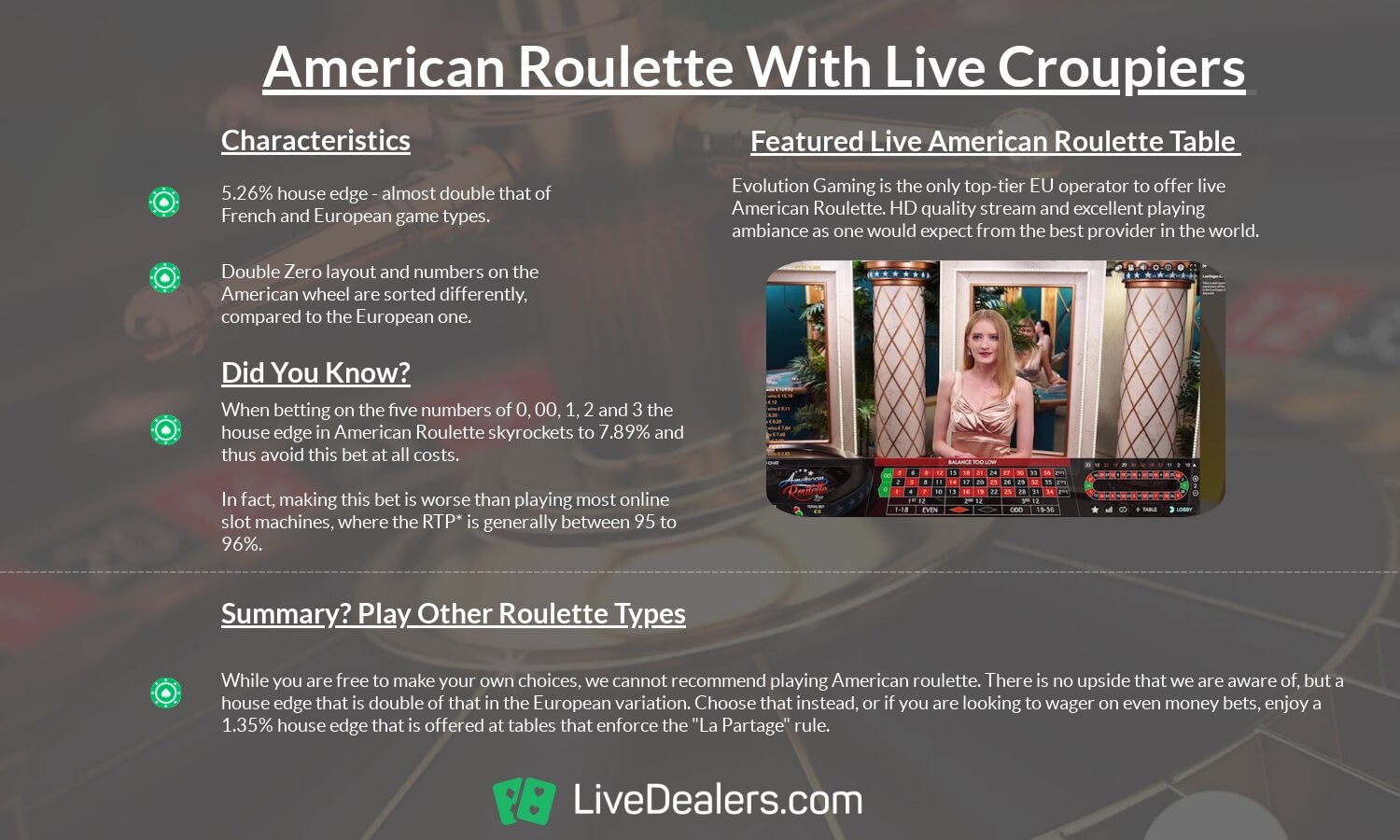 With that in mind, you might be wondering what the best version of American roulette with live dealers is? Below we’ve provided you with some info to the places we would recommend, giving you all the data and analysis you need to make an informed decision before making a wager on an online American roulette table.

Evolution Gaming – Evolution became the first European operator to offer a version of American roulette with live dealers to its market, and it makes it an interesting proposition when compared with other providers of the popular game. The American roulette table offers a 5-bet option, where a player can place one bet that covers 5 numbers – 0, 00, 1, 2, and 3. The table is available on multiple platforms, from Mobile to tablet and Desktop.

Your live dealer is stood opposite rather than sat down as you would expect to see within the French and European versions of roulette. Evolution has invested heavily in its wide range of online games with live dealers.

So if you are playing for real money with live dealers on an Evolution Gaming platform you can guarantee that the video quality will be to a high standard, that the interface is easy to use and that all of your betting options and settings are flexible and simple to utilise.

Differences Between American Roulette and Other Variations

As mentioned during the historical background to American roulette, the major difference when compared with French and European roulette is that there is the addition of an extra zero on the wheel.

This means that you can place a bet on 38, instead of 37, slots, but at the same time this gives the house a larger edge at 5.26%. This ensures that you are not as likely to win as when playing French roulette and is a reason why American roulette is not as popular the world over. The addition of the double zero has also had an effect on the layout of the numbers, with the numbers organised in a different order to the other variations of the game.

American roulette is a fun and fast way to play the traditional casino game. If you are looking to play for real money with live dealers, we would recommend you take a look at the offerings at Leo Vegas and Royal Panda Casino.

Visit Casino
* T&C's Apply to all bonuses. Must be 18+ to participate. Please gamble responsibly. Visit begambleaware.org for more details.