Intertops Casino Rolls Out Weekly Giveaways with up to $270,000 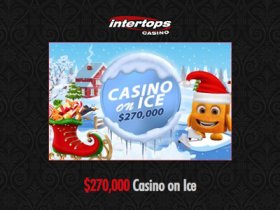 Intertops Casino has set in motion another promising deal. This time, players can enter weekly giveaways, make deposits, play interesting games, and make some cash. The offer is available until February 1st, 2021.

Intertops invites players to join the games on the ice and enjoy the winter. Those who take part in the deal will have an opportunity to collect up to $30,000 in weekly giveaways and special cash award at the end of the deal.

As part of the promotion, 300 leaderboard prizes will be distributed among players every Monday. You can even take bonuses up to $500 and have a great time. Just deposit at least $75 to qualify for the bonuses. In addition to it, you can take one point for every $100 you play on the available games. The prize is in direct correlation with the number of earned points.

Members can also take advantage of the Thursday draw! Just play between Monday and Wednesday and win one of 50 free $20-$150 bonuses on Thursday! You will be informed about the winnings via email.

As soon as the promotion comes to an end, you can count on a $1,000 cash prize, which will be given to one of the players.

Before entering the deal, be sure to check the following terms: