Blueprint Gaming to Release Deal or No Deal Megaways™: The Golden Box 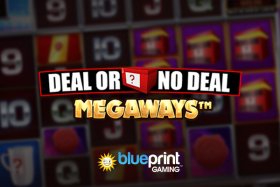 Cutting-edge producer of slot content, Blueprint Gaming, continues its busy period in the casino market. The brand has decided to move forward with Banijay Brands cooperation and unleash a new game, Deal or No Deal Megaways™: The Golden Box.The new game will be the latest addition to the provider’s portfolio and inspired by the famous TV show.

More About the Release

Blueprint saw a successful period when it launched several games across the UK, based on the Banijay Brands license. The former brand appeared 15 years ago and still enjoys notable popularity among users.

With the latest step, Blueprint has confirmed its leading position in the market, specialized in slot development. It recently added another interesting game, Deal or No Deal Lightning Spins™ with a superior Lightning Spins bonus concept. It has also made a difference with games in the Pub Fruit Series as well as Megaways releases.

Speaking on the new launch, Director of Marketing and Relationships at Blueprint, Jo Purvis said:

“We’re really excited to unveil Deal or No Deal Megaways™: The Golden Box, which promises to be another quality addition to our catalog of games inspired by Banijay’s globally-recognised TV show.

“It’s fantastic that the team at Banijay Brands has entrusted us to deliver the iconic brand to the slots market. These Deal or No Deal games are hugely popular with our players in the UK and continue to attract the interest of new customers”

“Blueprint has done a tremendous job in elevating the Deal or No Deal brand to new audiences. We are confident this latest addition to the franchise will be a hit, given how successful recent games have performed.

“The company has consistently produced high-quality Deal or No Deal games and its latest creation is set to be another superb release.”

The Megaways mechanic has become one of the most dominant features in the Blueprint titles, with its license from Big Time Gaming.