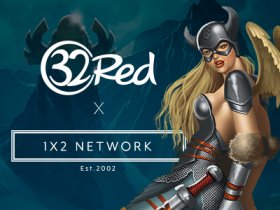 1X2 Network has added another top-tier gambling brand to its suite of partners. The company has signed a deal with 32Red to integrate its full portfolio to the same platform.

Following the new integration via Microgaming, 32Red customers will be able to access games from the 1X2gaming and Iron Dog Studio studios for the first time. Included will be the hit releases such as Pirate Kingdom Megaways, Rock the Reels Megaways, and Rainbow Wilds Megaways.

32Red will also introduce 1X2 traditional releases including Neon Jungle and Blood Queen, enabling the operator to include quality content and increase the level of excitement. The casino will also present a Branded Megaways slot, providing players with access to a genre that enhances the level of engagement and drives recognition.

More About the Product

1X2 Network presented its Branded Megaways concept in August 2020, enabling operators to swiftly and effectively introduce its own Megaways slot with a unique and recognizable identity. Thanks to the newly invented concept, the provider has already earned Game of the Year Recognition at the EGR Operator Awards.

Commenting on the terms of the new partnership, Sales Director at 1X2 Network, Jack Brown, said:

“32Red is one of the biggest brands in the business and adding our games to its portfolio is a major milestone for 1X2 Network and our 1X2gaming and Iron Dog Studio subsidiaries.

“It shows that our games are now considered firm player favorites and that they are a must-have for operators looking to offer their players the best slots and table games on the market.”

According to Brown’s words, the company is thrilled that 32Red has chosen to launch a Branded Megaways game. These slots have already proved to be something new among clients that have introduced them to date and the operator will be able to benefit from their unique potential.

Commercial Operations Manager at 32Red, Adam Newnham, says that his company is very happy to go live with 1X2’s content, which will involve top releases such as Pirate Kingdom Megaways and Megaways Jack. They are looking forward to the future partnership with 1X2 and expect to cooperate to launch some interesting titles in the upcoming period.

1X2 Network is the latest corporate name for the established 1X2gaming group of enterprises. It operates as an independent software brand with the center of operation in the UK.