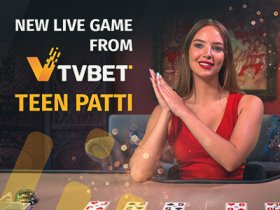 This is an exciting card game with an oriental theme and it was initially developed for the Asian market for Supernowa, along with three other games: Andar Bahar, 32 Cards and 7Up 7Down.

Now Teen Patti is available for TVBET’s business partners from all over the world as it became the 13th title in the company’s international portfolio. TVBET’s decision to offer this title to all of its partners came after Teen Patti became very popular in the Asian market while being featured in Supernowa’s online casino.

TVBET is also present on the Indian market through a partnership with Betskey, one of the most popular online casinos in the country. The whole portfolio of the supplier is available on Betskey’s website, including widely popular games like Keno, Poker, 1Bet, JokerBet, and Lucky6.

An Indian Game That Conquered The World

Teen Patti is a card game that originated in India, and it’s name is translated as “Three Cards”. In fact, the game is also known to the international audience under the name of “Indian Poker”.

This was one of the main family card games in the country during the 20th century, especially during Diwali, the famous “Festival of Lights”. Then the game entered private gaming clubs in Mumbai and Goa before expanding throughout Southeast Asia along with migrants from India.

The rules of Teen Patti are quite simple, and that’s probably why the game is so popular. A standard 52-card deck is used, and the dealer hands one card to each player, until each of them has three cards in hand.

The goal of the game is to collect a stronger combination than the opponent’s hand. Those who take part in the game can place bets either on the victory of one of the players or on a winning combination.

Before each game starts, participants can place bets on both the current game and on future rounds. With TVBET’s variant, players can also be in with a chance to win one of the three jackpots that are up for grabs in each game.