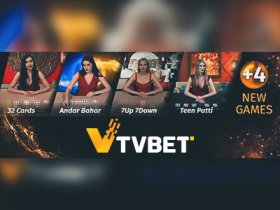 TVBET, the international supplier of live dealer games for online casinos, has announced the launch of four brand new titles, especially designed for the Asian market but also available in the rest of the world.

These four new titles are Andar Bahar, Teen Patti, 32 Cards and 7Up 7Down, and they have initially been included on the website of TVBET’s local partner named Supernowa.

In fact, these four live dealer games were created by TVBET at the request of Supernowa, one of their biggest partners in Asia. Players in this region already know the mechanics and the rules of these games, so they should be quite comfortable playing them. However, these are not complicated games so they should be appealing to the global audience as well.

TVBET is also present on the Indian market through a partnership with Betskey, one of the most popular online gambling platforms in the country. The whole portfolio of the provider is available on Betskey’s website, including extremely popular games like Keno, Poker, 1Bet, Joker, and Lucky6.

The Four Titles in Detail

Andar Bahar is a very simple card game with two sections: “andar” and “bahar.” The dealer will start by drawing a single card, the Joker, which will be placed on the table in a designated space. Then additional cards will be drawn one by one, and they will be placed alternately in the two sections. The purpose of the game is to find a card that has the same value as the Joker.

Teen Patti has to be played by two people, in addition to the dealer. The rules are extremely simple and straightforward: three cards are dealt to each player and the one who has a stronger hand wins.

32 Cards is played, as the name suggests, with a non-standard deck that comprises thirty-two playing cards, with no cards from Ace to five. Four players are needed to play this game, and each of them will have a number from 8 to 11 assigned. Each player receives one card from the dealer, and its value is added to the player’s initial number. The goal is to have the highest number of points.

7Up 7Down is a bit more complex, as it uses eight decks of cards, all with the standard 52 cards in them. The dealer will shuffle all of them together before placing the card into a shoe. Then cards will be drawn and the players will have to guess which card will come out of the shoe, if its value will be below or above seven or maybe the seven card itself.