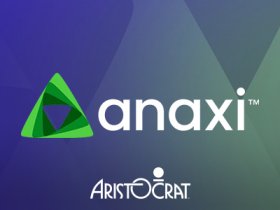 Aristocrat Leisure Limited, the Australian developer of slot machines for land-based casinos and digital games for online casinos, has announced that its online division will operate under a separate brand from now on.

The chosen brand is “Anaxi”, and it will comprise the entire online real-money gaming division of Aristocrat Leisure Limited. The division launched in February 2022, becoming the third operating business for the company alongside Aristocrat Gaming, the slot-machine manufacturing arm, and Pixel United, the mobile-first publishing business.

The move came after the Australian company failed in its attempt to acquire Playtech, the online gambling technology giant. Aristocrat made an offer worth 2.7 billion pounds for the company at the end of 2021 but the deal fell through in February 2022, when the Playtech shareholders rejected the takeover bid because they felt a better price per share could have been obtained.

That didn’t stop Aristocrat Leisure Limited as the company set an ambitious goal for the future: becoming “the world’s leading online gambling platform.” The Australian company also continued to pursue acquisition opportunities and last week it announced that it will buy Roxor Gaming, an iGaming content supplier based in the United Kingdom.

The Most Trusted Name In Real-Money Gaming

The first new products under the Anaxi brand are expected to go live by the end of the year with two major customers on the United States market. The new branding is expected to support the company’s “build and buy” growth strategy.

Mitchell Bowen, the Chief Executive Officer of Anaxi, announced that he expects the new brand to “reimagine the world’s greatest gaming content online” and that the company’s goal is to become “the most trusted name” in online real-money gaming.

Aristocrat Leisure Limited was founded all the way back in 1953 and since then it grew into a company with a major global presence, operating in over 90 countries. The corporation’s headquarters and administrative offices are in Sydney, but Aristocrat also has marketing and development offices in South Africa, Russia and the United States.