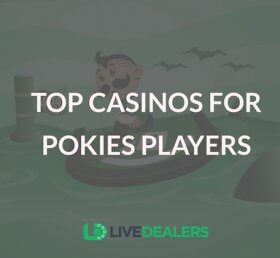 Australia is a tricky place to play your favourite online casino games. The legislation around online casino gaming means that very few leading pokie sites remain active. Online casino gaming is generally prohibited under the Interactive Gambling Act 2001. However, online casinos do still exist and are licensed out of the Northern Territory, provided they offer services to players outside of Australia.

Despite this, there are still a few great offshore domains which cater to players residing inside Australia. A handful of these make up the very best pokie sites for Aussies to play at. At the same time, they offer far more than just pokies. These leading casinos also deliver live dealer casino games. It is these top casinos, which are our focus.

Below you will find the top five pokie sites for Australians to play real money pokies at. Each of these leading domains is amongst the very best at catering to Aussies and carries both quality pokies and ultra-realistic live casino games. They all come highly recommended and can offer secure, safe and fair casino gaming. Without further ado, let’s take a look at them…

Casoo is a top site which is very open to players based down under. It is new for 2019 and has made an immediate impact with fans. Owned by the reputable SG International, this Curacao licensed domain provides both live casino and pokies.

Live casino games come from the vaults of Asia Gaming, SA Gaming, Ezugi, Evolution Gaming, and Authentic Gaming. They, too, have a considerable welcome package which is available in the Australian dollar currency.

Arguably more mobile-friendly than rival sites, their treasure trove of games includes the Sakura Fortune (see below), Rich Wilde and the Book of Dead pokies, and many more. Support is widely available at the domain, with an FAQ providing an in-depth guide to seemingly anything you might need to know, and live chat doing the rest.

BitStarz Casino will be instantly appealing to players in Australia. They have a specific welcome bonus which targets Aussies. The promotion is worth up to AUD$10,000 or 5BTC and comes with 200 free spins when newbies sign up and deposit. The domain launched in 2014 and caters to Bitcoin and Australian dollar users alike.

The casino is notable for its dedication to around the clock support, and it’s super quick withdrawal time. Licensed out of Curacao, the domain’s live casino games come from Evolution Gaming as well as Authentic Gaming and number of 50 in all. Pokies lovers are also in luck, with titles from BetSoft, iSoftBet, Quickspin, Yggdrasil and a handful of titles available over Microgaming’s Quickfire platform.

Playamo Casino launched in 2016 and is one of several leading Direx N.V. owned casinos to cater to players in Australia. Four top providers (Authentic, Ezugi, Evolution and Vivo Gaming) all dish out a share of over 150 live casino games to players at this Curacao licensed site. If live dealer titles aren’t your forte, many other providers deliver table games and pokies to players, via online, mobile and bitcoin speciality platforms.

Twin welcome bonuses, a high-roller offer and loyalty deals will impress. Moreover, the site features relatively high withdrawal caps of up to AUD$50,000 per month. Playamo tries to process withdrawals in under 12 hours of less (using selected payment methods), which is something very few other Aussie domains can achieve. Whether you favour cryptocurrency, mobile, high-roller, instant play or live dealer gaming, there is something for everyone at Playamo.

mBit Casino is arguably the number of Bitcoin and cryptocurrency domain on the net for Australians. Tournaments and a wealth of games are major selling points of this Direx N.V. owned, and Curacao licensed site. Ever since they debuted in 2014, mBit Casino has been on a mission to fill its library with the best pokies and table games around. To date, well over a thousand games are ready and waiting for players in Australia. Live casino titles primarily come from Evolution Gaming and Ezugi, with top pokies playable from BetSoft, iSoftBet, Yggdrasil and others.

mBit accepts the Australian dollar currency alongside cryptocurrencies and provides payment methods which work for Aussies, too. Notable for its vast array of promotions and bonuses and VIP program, there are plenty of ways to get ahead when playing at this site. A flashy site which is comfortable offering mobile gaming, too, mBit comes highly recommended.

Unfortunately, Australian players can’t access the full array of pokies that they might like to or indeed used to. Major Australian providers such as Aristocrat may be popular in the land-based venues, but their titles are mightily tough to find online due to regulations and restrictions.

Fortunately, there are plenty of other great pokies to play. Some of these come from providers who offer a similar gaming experience to Aristocrat. We’ve put together a list of five top online pokies which Australians love, and which we highly recommend you have a punt on.

Wolf Treasure is a pokie which debuted in 2019 from IGTech. This release has become something of a success story since it debuted, and is remarkably similar to the Aristocrat pokies you can find in land-based venues.

Stakes cost between AUD$0.25 and AUD$125 a pop in this wolf-themed release, which offers up the usual scatters and wilds.

Up to 5 free spins can be won if scatters appear on the reels, with the second, third and fourth reels locked together with colossal icons in this round. Players will also note that three fixed jackpot prizes can be won, too, when “money symbols” appear on the reels of a “money re-spin” bonus.

Caishen’s Fortune is an Asian-themed release and one which focuses its gameplay on a 243 ways to win payline structure. A lucrative RTP (return to player) rate of 96.25% is appealing, and so, too, is the decent non-progressive jackpot the game carries. Affordable to play and with relatively medium-low variance, Caishen’s Fortune is a game which is open to seemingly all.

A few features are worked into the pokie’s design, too, not least a free spins bonus round. That round is preceded by a click and win feature, where players could snap up a handful of multipliers (and further spins) to help them finish the job of landing a fair and modest non-progressive prize.

The legendary Sakura Fortune pokie is famous the world over and has become a particular hit with many Australian players. Played over 40 lines and 5 reels, the pokie is themed on a Japanese princess. It costs as little as AUD$0.20 and has an impressive return to player rate of 96.5%.

Special mention must be made of the princess wild, and she appears stacked on the reels. This is a pokie which offers Aussies both re-spins and free spins. Stacked and expanding icons play an essential role in assisting players in winning a non-progressive haul which is worth over 100x a line bet. When pokie features are as prosperous as this, it is little surprise to see that Sakura Fortune is a big hit down under.

This 243 ways to win pokie is one of the cheapest pokies you can play, costing between AUD$0.01 and AUD$20 a game. Suitable for low-rollers, the 3D pokie is naturally panda-themed and packs a punch with stacked wilds, and randomly triggered splitting wilds which can count for two symbols. There is also a free spin game which can see wilds appearing in place of scatters, before travelling across the reels.

Panda Panda is designed to mimic Aussies’ favourite land-based games, and to that end, there is a gamble feature included. It can be triggered following any win. A simple “guess the card” feature follows, which can potentially double your winnings.

You may be familiar with FarmVille and FarmVille 2 as iconic Facebook games, which were launched a few years back by Zynga. They have since become leading online pokies. FarmVille2 features plenty of imagery from its social media-based predecessor, but dishes out a fair few new and original goodies, too.

The pokie is played over 5 reels and 25 lines. The free spin feature in the game can see symbols collected upon the reels. Those collected symbols then deliver further features, based on how many are in the kitty, and these can include wild reels. The popular pokie also promises a gamble feature amongst its goodies.