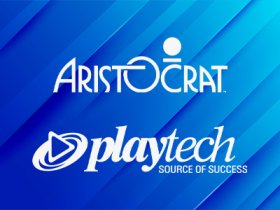 Aristocrat Leisure Limited, the Australian developer of casino slot machines and digital games, has announced it has launched an attempt to acquire Playtech, a fellow developer of video slots and live dealer games.

According to a company filing, Aristocrat has already convinced some of Playtech’s shareholders to accept the offer. The Australian company revealed that it has received letters of intent or irrevocable undertakings from shareholders representing 20.7 percent of the total outstanding shares of Playtech.

Moreover, the Platech board of directors have also found the offer appealing, recommending the remaining shareholders to vote in favour of the acquisition deal. The offer from Aristocrat is worth 680 pence per share, 58 percent more than the actual closing price on Friday, 15 October, which was 429 pence per share.

For Aristocrat, the acquisition of Playtech would mean a much faster route towards growth and a better strategic position on the global market. The main asset that would be acquired is Playtech’s strong presence in the real money gaming (RMG) market segment, which is now estimated to be worth around 70 billion U.S. dollars.

The acquisition will provide Aristocrat the tools it needs to fulfill a wider range of player needs and also a paved road into multiple European markets. Playtech was founded in 1999 and has developed into a powerful provider of video slots and live dealer games for online casinos. The company has around 6,400 employees across 24 countries, and its products can be found in almost all the largest online casinos in the world. Playtech’s live casino titles are currently broadcast from studios in the United States, Latvia, Estonia, the Philippines and Romania.

The Chief Executive Officer added that the company would become much stronger by offering a broader portfolio of solutions to its business customers around the world, while players would get to enjoy a seamless experience.

Moreover, the Aristocrat boss revealed that he believes the move would “create a true industry leader in the global online RMG space.” The Australian company plans to fund the acquisition with a loan worth 2.05 billion dollars and another 965 million dollars through an entitlement offer which will be launched later this week.

In the first half of the fiscal year, Aristocrat Leisure Limited has reported a normalized net profit after tax of 412 million dollar, up 12 percent compared to the same period of the previous year.