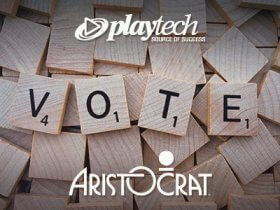 Aristocrat Leisure Limited, the Australian developer of casino slot machines and digital games, has seen its offer to take over Playtech fall through as the shareholders decided to vote against the takeover bid.

Playtech, one of the world’s leading providers of software and content for online casinos, will most likely proceed to break up its activities and sell them off in parts. In fact, Playtech’s board announced that it had already received proposals for its B2B and B2C subsidiaries.

Before the vote, Abrdn, the third largest shareholder in Playtech, announced that it would support the takeover bid. The opposition came from some Asian shareholders, who considered that Aristocrat’s offer of 680 pence per share undervalued the business. The overall value of the offer was 2.70 billion pounds, and it was submitted by Aristocrat in October 2021.

At that time it seemed the deal would go through but then the vote on the proposal was postponed due to a possible rival bid coming from JKO Play, a company that is led by former Formula 1 team owner Eddie Jordan and former Scientific Games executive Keith O’Loughlin.

Selling Off The Pieces

After the takeover bid failed, the Playtech board announced that it would now focus towards maximising value for its shareholders by selling off the company’s B2B and B2C businesses. These sales should, however, go through the approval of the shareholders as well.

The company’s B2B and B2C businesses have been performing well in recent years. One of the main targets for an acquisition is Caliplay, the company’s joint venture in Mexico with Celiente. The goal for Caliplay is to be sold to a special purpose acquisition corporation which would facilitate its entry into the United States market.

In Europe, Playtech can sell Snaitech, its B2C business aimed at the Italian and German markets. Moreover, the company is expected to complete the sale of Finalto by the end of the second quarter of 2022, a deal that was agreed in December.

Aristocrat expressed disappointment after the deal fell through and Trevor Crocker, the company’s Chief Executive Officer, blamed a group of shareholders which refused to engage with the buyer regarding the offer.