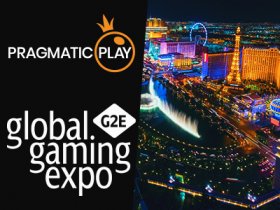 Pragmatic Play has informed customers about participation in the upcoming event, Global Gaming Expo (G2E) in Las Vegas. The event is taking place in a stunning Venetian Expo from 4th to 7th of October, as one of the most famous gaming conferences in the United States. It will see many stakeholders from all areas of the gaming industry sharing their opinions.

Pragmatic has already announced that its VP of Latin American Operations, Victor Arias, will represent the company. He will focus on networking and round tables during the event. This is yet another attendance from the supplier after having a presence at SAGSE Miami and GAT in Colombia.

The provider has already extended its presence over the previous year while signing agreements with leading brands – BetDiamond, Loto Giro, Jackbet, and Codere.

“G2E is an exhibition that needs no introduction and we’re delighted to be attending it this year. After a turbulent time for many, we’re very excited to be back in Las Vegas.

“It is an exciting time as industry events re-emerge and we look forward to connecting with the best and brightest in igaming as we look to spread our footprint in the Americas further.”

Pragmatic recently closed another agreement for global expansion. The company entered an agreement with Intelligent Gaming to distribute its games via the Supabets platform. The latter is one of South Africa’s leading brands and inventive wagering platforms. They are proud to be a premier brand to launch an incredible catalog of the supplier’s products.

The latest deal will see Intelligent Gaming’s customers will get access to Pragmatic’s collection of high-quality slots including the popular John Hunter series and a selection of Megaways™ games, such as Power of Thor Megaways™. It will be followed by the launch of Live Casino games, such as classics table titles, Blackjack, Roulette and Baccarat, Mega Wheel, and Mega Roulette.

Pragmatic Play is a superior provider of casino content, founded in 2015. Its portfolio consists of live casino, bingo, and slots and the company aims to enrich its suite with new games on a regular basis. Its games stand out with a high level of regulation, innovation, and mobile optimization. Pragmatic has just obtained a prize for RNG Casino Supplier of the Year at the International Gaming Awards.