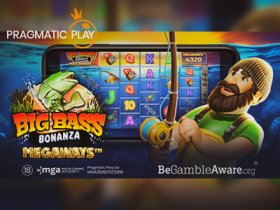 Pragmatic Play, a top provider of casino games to the industry, is excited to announce the third installment from the famous series, Big Bass Bonanza Megaways™.

The latest game from the brand keeps the original theme while enhancing the format. The aim of the game is to collect as many fish symbols as possible during the Extra Game feature.

While you are playing Big Bass Bonanza Meagways, you will also take advantage of a tumbling win system, which delivers payout combinations and removes them from the reels. Later on, new symbols fall into the empty spots, creating combos until no wins happen.

If you are successful in landing, four, or five scatters, you will activate the Extra Game feature, providing users with 10, 15, or 20 bonus spins, respectively. In the Extra Game, fish elements are not taken from the reels as part of the tumble feature. Instead, they fall to the bottom of the display as tumbles happen.

There are also Dynamite and Bazooka features in the Extra Games feature, with the latter adding fish elements in random spots on the reels, and the latter occurring when 2 Fishermen are in view without fish, placing all symbols in view, bar the Fishermen.

Big Bass Bonanza Megaways™ is yet another release from Pragmatic right after the introduction of Bounty Gold™ and the Mexican-themed title Big Juan™, as well as the latest John Hunter and the Quest for Bermuda Riches™. The provider is famous for its gaming library which includes more than 200 games.

“We are delighted to be able to breathe new life into a series that has become a staple of our collection, and to launch yet another product in collaboration with the Reel Kingdom.”

More About the Leading Brand

Pragmatic Play is an established provider of casino content, famous for producing slots, live casino, and bingo. Its portfolio consists of mobile-first, regulated, and cutting-edge games which attract the attention of regular players. The company plans to become the leading provider of gaming entertainment. It delivers up to five new slots every month and users can access games via a single integration. Its Wolf Gold slot is one of the most successful games from the suite.