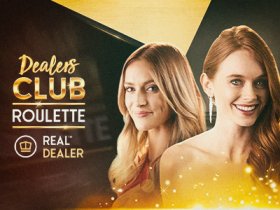 This new title represents an industry premiere as it is the first RNG (random number generator) casino game in which the dealers switch at regular intervals, just as they would in a real land-based casino. The game has eight dealers which keep the action going.

The roulette hosts that Real Dealer Studios has chosen for Dealers Club Roulette are Sarati, Holly, Bailey, Caroline, George, Dave, Rishi and Matthew, who are already well-known after having hosted other titles in the developer’s Real Roulette series.

The hosts switch automatically at a set time interval but if the player likes a particular dealer more than the others the automatic switching feature can be turned off at any time. Moreover, players can pick their favorite dealer from the menu at any point.

Shane Cotter, Chief Product Officer at Real Dealer Studios, described the new product as a “unique proposition” for players and added that “ there’s no other RNG online casino game on the market that offers this functionality.”

Real Dealer Studios was established in 2019 and it has become a unique presence in the industry, This developer aims to deliver a totally unique player experience through its portfolio of cinematic RNG games.The company’s goal is to create an innovative range of products by blending film and iGaming.

The recordings are made using filmmaking technology, film directors and professional actors, while the post-production crew is also ready to deliver levels of production that one could find in Hollywood. That is a unique feature for the online gaming world, giving players a casino experience that should make them feel like a VIP.