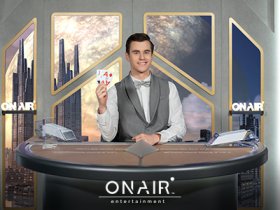 OnAir Entertainment, the fast-growing supplier of live dealer games for online casinos, has announced that its live casino portfolio received a boost with the launch of Eclipse Blackjack.

The new live blackjack game will be made available to operators around the world from October 11. Eclipse Blackjack is a more exciting and scalable version of the supplier’s classic Blackjack game. This version allows an unlimited number of players to take part.

Eclipse Blackjack also offers players the opportunity to place side bets alongside the main bet. These side bets include 1+3, Perfect Pairs, Lucky Lucky, Bluster Blackjack and Royal Jacks. Moreover, the operators that are in partnership with OnAir Entertainment will be able to configure all side bets and also add their own branding to the game.

Players who like to make the game more exciting can do that with just a single click as the game features a “place all side bets” button. The hardcore blackjack fans can also enjoy real-time statistics of the game in order to make informed decisions regarding the next bets.

Nare Grigoryan, Business Development Manager at OnAir Entertainment, revealed that the developer believes the new game is going to “exceed expectations” as players will benefit from an enhanced gameplay experience.

Another New Studio Coming Up

Along with releasing new titles, OnAir Entertainment is also constantly working to expand its production capabilities. In fact, the company announced that it plans to open a brand new live casino studio in Spain in 2023.

The new studio will feature multiple roulette tables, including two Standard Roulette, one Auto Roulette, and one table for the upcoming Nexus Roulette.

Spain will be the company’s third new market available in the first quarter of 2023 alongside Italy and Romania. The provider has launched its products on 10 new markets in just 10 months and it has another two new studios in the making, one in Romania and the other in Georgia.

OnAir Entertainment is certified in crucial regulated markets including the Isle of Man, the United Kingdom, Greece, Ontario, Latvia, Sweden, Denmark, the Netherlands, along with all Malta jurisdictions.