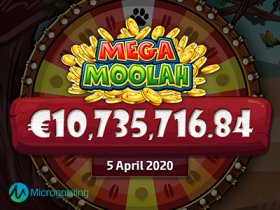 Microgaming’s Mega Moolah Progressive Jackpot has been struck once again to award staggering €10,735,716.84 (or ₹892,7 million) to an online casino player, which officially became the first millionaire in 2020 made by this legendary network!

Whopping €1,1 Billion Paid Out To Date

Just as it’s the case with all top prizes across the network, this unbelievable eight-figure trophy will be paid to the player in a lump sum, which is not less amazing than the win itself.

“We are thrilled for the victorious player who struck this staggering €10.7 million win – congratulations! Mega Moolah continues to be a favourite among players worldwide, and so we are excited to be adding more new progressive games to the jackpot and network throughout the year.“

Undeniably the largest in the industry, the supplier’s Progressive jackpot system has paid in winnings more than €1.1 billion to date, with €26 million taken home by patrons this year alone including over 150 punters landed at least €10,000.

…came as a natural continuation of an eventful 2019 marked by a number of fantastic wins, one of them – a massive €13.3 million payout struck by a Zodiac casino player – helped reach Mega Moolah’s €1 billion milestone. Last year also became special due to the fact, it made two new millionaires in just 48 hours as in March two bonanzas of €11,546,388.15 and €2,201,120.31 were hit only one day apart.

Not Large Enough For Guinness

With such a rich history of hefty payouts, no wonder Microgaming’s progressive network is extremely popular among players of online casinos, all the more so, new releases are added regularly to cater to all tastes and preferences. Launched in February, Atlantean Treasures Mega Moolah and Wheel of Wishes are the most recent titles offered to all fans of progressive slots.