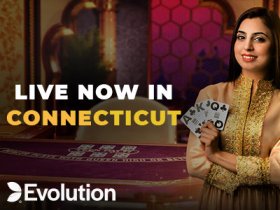 Evolution, the world’s most powerful supplier of live dealer games for both online and land-based casinos, has announced that its footprint in the United States has extended with a new live casino studio in Connecticut.

This is the fourth live casino studio set up by Evolution in the United States, after the company opened similar facilities in New Jersey, Pennsylvania and Michigan. Moreover, Evolution recently entered the market in West Virginia by making its titles available to operators that are licensed to run online casinos in this state.

A statement released by the company explained that the new studio that was set up in Connecticut will be serving the booming iGaming market in the United States. Evolution has been present in this market since October 2021.

Two of Evolution’s business clients, FanDuel and DraftKings, have already gone live with the supplier’s products in Connecticut. For now, the two major operators will be offering their customers roulette and blackjack games delivered by Evolution, but more titles will be added to the offering in the near future.

The first new titles that are lined up to be added to the portfolio in Connecticut later this year are baccarat and the immensely popular Lightning Roulette. This game has also been launched in New Jersey at the beginning of 2022.

Speaking about the company’s launch in Connecticut, Jeff Millar, Commercial Director of North America at Evolution, declared himself “proud and excited” as the supplier further expands its footprint in the United States.

Jeff Millar added that the company is “confident that online players in Connecticut, just like players in New Jersey, Pennsylvania, Michigan and West Virginia before them, will enjoy a truly world-class gaming experience.”

Moreover, Millar explained that the Connecticut live casino studio has plenty of room to grow and will do so as the market expands. “There’s room to expand to meet licensees’ needs,” Jeff Millar added, underlining that Evolution is also ready to open exclusively branded tables and environments for partners in the state.

In a similar way, in 2021 Evolution announced the launch of a dedicated live casino studio in New Jersey for Penn Interactive, the iGaming subsidiary of Penn National Gaming. The dedicated studio was set up inside Evolution’s already existing facility in the state of New Jersey.