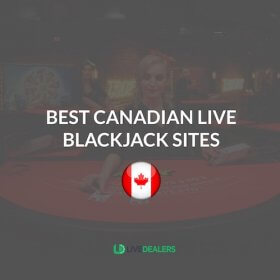 Most live gaming providers, with the exception of some that focus on Asian markets, feature Live Blackjack as part of their offering. Some of these products are standard 7-seat games while others have the potential to accept an unlimited number of players.

There are other differences that can significantly impact the quality of your gaming experience so we took time to test them all and recommend the best Live Blackjack online casinos, tables and providers.

What does a Canadian Live Blackjack fan consider to be important? First of all, they want to have access to top quality games with limits that fit their gaming budget. Since playing live dealer games requires real money, they’ll want to be able to transfer money using one of their preferred payment methods.

The ideal gaming site will facilitate boosting of the player’s budget via an appealing welcome offer. And last but certainly not least, there will be an assurance of a fair and safe gaming environment. The following online casinos provide all of the above and more, including live online roulette, baccarat and a bunch of other games.

Rizk features unique site design and a superhero spokesman eager to introduce new players to its rewarding Wheel Of Rizk and other one-of-a-kind features. A deposit of only $10 made with any payment method other than Skrill and Neteller makes the newly registered member eligible for Live Casino welcome bonus of up to $250, subject to 70x wagering requirement.

Interac is available so feel free to use it to transfer cash needed for playing Evolution-powered Live Blackjack games.

Rizk is home to 44 Live Blackjack tables with limits ranging from $1 to $10,000. The choice consists of numerous 7-seat affairs and Free Bet Blackjack, a one-to-many variant with extra freebies. Exclusive Rizk Blackjack tables feature limits of $5-$10,000 and frequently provide an opportunity to participate in an exclusive promotion such as the currently active $30 gift offered to players who manage to score 21 with a hand full of hearts.

Winner of multiple EGR awards, including those for “Mobile Casino Product of the Year” and “Best Native App”, has a welcome offer tailored-made for you: the first two deposits of $10 or more will each make you eligible for a Live Casino bonus of $10-$250. Live dealer games contribute 100% towards the 70x wagering requirement.

Your account needs to be funded in order to play any of live games and Leo will offer you to transfer money using iDebit, InstaDebit, Interac and a few other options.

You’ll have to deposit a minimum of $20 to claim this offer and can do so using Interac or one of the other options; just make sure not to pay via Skrill or Neteller as those deposits won’t qualify.

This is a Playtech-powered gaming site and the same developer has provided 20 Live Blackjack tables with limits of $1-$1,000. All can seat up to 7 players except for Unlimited Blackjack which caters to hundreds and thousands of participants simultaneously. Soiree and Soiree Elite Blackjack accept higher value bets so they’re considered to be VIP tables.

In addition to the main bet, players can place optional Pairs and 21+3 side wagers to score more generous payouts.

Casumo stands out in terms of concept, design and mechanism used for rewarding loyal members but offers a fairly standard welcome deal. Open an account to receive the first freebie in the form of 20 no-deposit free spins and then deposit at least $20 to claim a 100% match bonus up to $500.

The sum of your deposit and credited bonus has to be played through 30 times and you’ll be happy to know that live dealer games contribute 10% and Dream Catcher as much as 100%.

Casumo has equipped its Live Casino with the help of the segment leader – Evolution Gaming. Betting range of $0.50-$10,000 is wide enough to make everyone happy. You’ll get to exploit 4 lucrative side bets while playing Infinite Blackjack and claim a seat at exclusive tables that feature Casumo branding as well as unique offers.

Wunderino adventure starts with a 100% welcome bonus up to $100 and 30 free spins. While spins come free of wagering requirements, bonus and deposit have to be played through 30 times within 30 days. The only downside is that live dealer games don’t contribute at all. If you still want to claim this gift, make a deposit of $10 or more using one of the supported credit cards or eWallets.

Wunderino Live Casino stores 90+ Live Blackjack tables, some of which are accessible 24/7 and several that are open during limited hours. All are positioned in Evolution Gaming studios and enable wagers of $0.5-$2,500. Infinite and Free Bet Blackjack are both accounted for but you won’t find Salon Prive; Wunderino seems to be catering primarily to players with small and medium-sized bankrolls.

Sign up for an exciting space travel adventure and Casoo will reward your first deposits with bonuses worth up to $2,000 as well as 200 free spins. Both the deposit and bonus received must be wagered 25x prior to withdrawing. If you choose to do so by playing live dealer games, 10% of your wagers will count towards the play-through requirement. Casoo supports more than 15 payment options and among them several cryptocurrencies.

In addition to Evolution Gaming, Casoo Live Casino features Live Blackjack games developed by Ezugi and Lucky Streak. You’ll thus get to choose among numerous 7-seat and unlimited participation tables and bet between $0.50 and $10,000 per round. Casoo regularly updates its portfolio and didn’t fail to include Infinite and Free Bet Blackjack.

It’s common to find 7-seat Live Blackjack tables with two standard side bets and more than a few companies also provide Common Draw alternatives. However, one of them does more than match what everybody else can supply. These Live Blackjack games are unique products developed by – who other than Evolution Gaming.

For a long time, all of Evolution’s Live Blackjack games were played at 7-seat tables with Bet Behind option offered to those that couldn’t find a vacant seat. Finally the developer added a one-to-many alternative called Infinite Blackjack and didn’t stop at simply allowing zillion players to bet at the same time.

In case of free Split, the free bet is placed on the second hand. Another point of difference is that the dealer will push with a total of 22.

Part of Rizk’s Live Casino offering are two exclusive tables powered by Evolution Gaming. They both feature 7 seats and support Bet Behind functionality, but although the game plays the same and uses Evolution’s familiar interface, there are two major differences.

The first has to do with visual appearance (studio design, table coloring, dealers’ outfits) which was adapted to fit the Casino’s visual identity. The other are exclusive promotional offers linked to these particular tables and advertised on screens mounted on brick studio walls.

Salon Prive was created to provide a true VIP experience by enabling high-rollers to play alone and at their own pace.

Canadians are quite lucky – most live dealer providers are open for real money player with NetEnt being the only major one that’s not. As always, we recommend going with Evolution Gaming for (by far) the biggest table and game variation variety.

Other worthwhile mentions include PlayTech, Lucky Streak and Ezugi who all have very solid products and could be worth giving a shot to.

You can bet on Evolution Gaming to deliver the best live dealer product no matter which type of game you happen to like the best – blackjack included. Evolution supplies the biggest number of tables so there’s a good chance you’ll always find a seat even when there are only 7 available positions. Regardless of the device used and internet speed, video and audio quality is always impeccable.

Friendly and professional dealers will welcome you to the table and respond to comments/ questions submitted via Live Chat window or initiate a conversation themselves. Admirably designed game interface makes it easy to identify various options and use them to tailor the experience to your own preferences.

Last but not least, Evolution Gaming continuously comes up with innovative solutions and is thus always able to offer something unique.

Canadians might not presently be able to join a NetEnt-powered Live Blackjack table but may still be interested to know what the experience is like. Unlike Evolution Gaming, NetEnt offers only Live Roulette and Live Blackjack (both 7-seat and Common Draw) but makes sure all of its products perform above average in every possible aspect.

In addition to standard Live Casino tables, NetEnt also features Live Beyond Live – a virtual casino designed to look just like a land-based establishment. Having entered, you’ll see casino floor populated by Blackjack and Roulette tables as well as other “casino patrons”. To join the table of their choice, players only need to click on it.

Playtech is considered to be one of the top suppliers of live dealer games owing to high streaming quality, user-friendly interface and just the right amount and kind of in-game options. The developer offers a choice of 7-seat Live Blackjack tables with Bet Behind feature and one which enables an infinite number of players to participate simultaneously.

There are 2 options – US or EU card-dealing style and you can tell which game uses the latter thanks to EU icons applied in the lobby.

Playtech’s Live Blackjack features one preferable rule: if you Double with the dealer’s first card’s value of 10 and they get Blackjack, your Double bet is returned. Games support Pairs side bet paying between 6:1 and 25:1, and 21+3 optional wager with a max win potential of 100:1.

Unlimited Blackjack has 5 open betting spots and you can choose to wager on any of them.