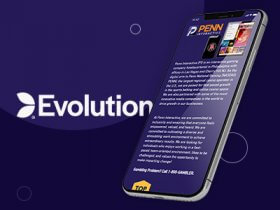 Evolution, the biggest global supplier of live dealer software and content, has announced the launch of a dedicated live casino studio in New Jersey for Penn Interactive, the iGaming subsidiary of Penn National Gaming.

The dedicated studio was set up inside Evolution’s existing facility in the state of New Jersey. The live dealer studio is branded “Barstool Sportsbook & Casino”, as Penn National operates several products with the Barstool brand.

The two companies have a long-standing relationship, with Barstool already launching live casino services from Evolution in Michigan and Pennsylvania. Moreover, video slots from NetEnt, a company which is now owned by Evolution, are live on Barstool’s websites in Michigan, New Jersey and Pennsylvania, with West Virginia ready to be added to the list by the end of the year.

In addition to all that, Barstool is eager to add video slots from Red Tiger, another Evolution brand, to its offering in Michigan, New Jersey and Pennsylvania later this year.

Jeff Millar, the Commercial Director for North America at Evolution, revealed that the two companies worked together “to create a bespoke dedicated live casino studio, completely customised to Barstool’s brand and look-and-feel.”

Expanding In The Netherlands As Well

A few days after the New Jersey launch, Evolution announced that its products have gone live with Dutch operator Janshen-Hahnraths Group in the Netherlands. The partnership includes Evolution’s live casino products along with its RNG-based games and video slots from its NetEnt and Red Tiger brands.

Moreover, Janshen-Hahnraths will have access to Evolution’s live games portfolio, which includes classic games such as roulette and blackjack along with the new and exciting range of live game shows.

Janshen-Hahnraths operates the Fair Play Casinos brand of land-based venues and it is one of ten operators which were allowed to launch in the Netherlands, after the country’s iGaming market opened on 1 October.

Evolution is the most important name in the industry when it comes to live dealer games. The company has become a global giant after the recent acquisition of NetEnt, the famous video slots provider. The company now employs over 4,000 people in several offices and studios located in various places around the world.

This year Evolution has also acquired Big Time Gaming, the Australian company that launched the highly successful Megaways mechanic, which has been introduced into hundreds of video slots from the world’s biggest providers.