11th Live Casino Supplier Of The Year Award For Evolution 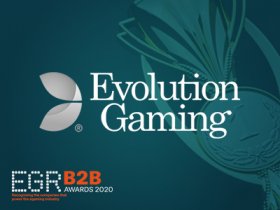 Evolution Gaming, the global leader in providing fully integrated Live Casino solutions, has become Live Casino Supplier of the Year at the EGR B2B Awards 2020. It’s the eleventh consecutive title for the Swedish brand, which serves over 300 operators across numerous jurisdictions worldwide.

Since 2010, the EGR B2B Awards reward and celebrate the very best service providers in the iGaming, paying tribute to their high achievements in all major fields of the industry. Officiated by Deloitte, this year’s virtual event was held on 21 July and Evolution has succeeded to beat the other twelve shortlisted suppliers.

Speaking after the solemn ceremony…

…Martin Carlesund, Evolution Group CEO said that “the past 12 months have seen Evolution once again push the boundaries of what is possible in Live Casino.“ Describing 2020 as „the most encouraging year“ due to a challenging global situation, he also highlighted the fact, Evo has continued to develop and introduce ground-breaking new products even under such uneasy conditions.

“We introduced a record number of 12 new games in that period. Our exclusive and unique game show games portfolio continued to grow with new titles such as Mega Ball and Crazy Time becoming immediate player favourites and major commercial successes.

We also continued to reinvent and reinvigorate classic casino games for the next generation of players, with Lightning Baccarat, Speed Blackjack and Power Blackjack all joining an already hugely varied and entertaining portfolio of both Live and First Person games.“

Apart from successful launches of the aforementioned live dealer games (including the most recent and most expensive Crazy Times), the expansion of the company’s operations is another important factor that contributed to the overall great results. In this regard, Carlesund mentioned the construction of a brand new studio in Pennsylvania, saying it is “just one of a number of exciting new studio developments in the pipeline.”

As for Vancouver hub…

“I know I can speak for everyone at Evolution when I say we are extremely proud to have retained this award. Once again, our people have worked tirelessly to extend our position as the number one Live Casino supplier and to deliver an exceptional Live Casino experience for players.

Our licensees, meanwhile, have been extremely loyal and always receptive to innovative new ideas that enrich our whole sector. My sincere thanks to everyone.”