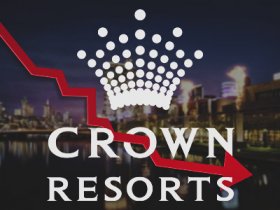 Crown Resorts, the biggest owner and operator of land-based casinos in Australia, has received bad news from Fitch, the well-known international rating agency. Fitch decided to maintain its “Rating Watch Negative” for the Australian company, along with the “BBB” Long-Term issuer Default Rating.

The experts from Fitch revealed that the negative rating was mainly due to concerns related to the findings of Royal Commissions currently investigating Crown Resorts in Melbourne and Perth. In fact, Crown Resorts warned the Victoria Royal Commission that the company could default on its debts if the state decides to cancel its license to operate the casino in Melbourne.

The optimistic forecast for 2021-2022 is largely due to the expected reopening of Crown Melbourne, one of the company’s top casinos. The Melbourne venue is expected to reopen later this year after having been closed for 160 days in the 2020-2021 financial year. That resulted in a 31.3 percent decline in revenue and a loss of 261.1 million Australian dollars.

From a strictly financial perspective, the company’s long-term prospects are promising, at least according to Fitch. But the big danger that looms is related to the increased regulatory risks, including the prospect of Crown Resorts having its gaming licenses in Melbourne and Perth suspended.

The company already had its license for Crown Sydney suspended following the release of the Bergin report, and is currently negotiating the issue with the New South Wales regulator.

The report from Fitch underlines that the regulatory risks that the Australian company is facing “could have a significant impact on the business or financial profile.” The rating agency added that it will review the “Rating Watch Negative” for Crown Resorts once the Royal Commissions will deliver their verdicts. The royal commission in Victoria is scheduled to wrap things up by the end of this year, while the investigation in Western Australia should come to an end in the first half of 2022.