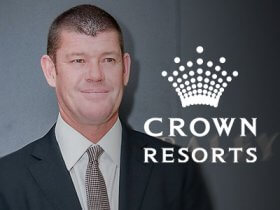 James Packer, the owner of Crown Resorts, the biggest land-based casino operator in Australia, has hired an adviser to help him evaluate any offers for his 37 percent stake in the company.

Consolidated Press Holdings, which is Packer’s private company, revealed it has hired investment bankers Moelis Australia to act as advisers on any potential deal to sell his stake in Crown Resorts.

This marks a change of attitude from James Packer, who previously said that he would like to follow any decision from the Crown Resorts board on a potential sale of the company.

It is believed that James Packer’s attitude shift means that he is trying to attract other bidders for the company. In fact, analysts said that the offer from Blackstone will most likely be rejected by most of the Crown Resorts shareholders as the price of 11.85 Australian dollars per share is considered too low.

On Wednesday, the Crown Resorts stock closed up above the offer price at $11.95, which indicates the market believes there is potential for a higher offer for the Australian company.

A Company in All Sorts Of Trouble

Crown Resorts is currently going through one of the most difficult periods of its existence. The company had to deal with the severe effects of the novel coronavirus pandemic on the business and now it also has to go through investigations from authorities.

In the first half of the 2020-20121 fiscal year, Crown’s revenue went down by 62.1% compared to the same period of the previous year. In the six months to 31 December 2020, the company attracted revenues of 581 million Australian dollars and recorded a loss of 120 million dollars.

At the beginning of march the government of Western Australia announced that it launched an investigation into the company’s suitability to hold a gambling license in the state.

That investigation follows the example of the states of Victoria and New South Wales, who have already put a big question mark on Crown Resort’s suitability to hold a gambling license. In fact, Crown’s casino in Sydney does not have a gambling license yet but it might receive it by the end of the year.