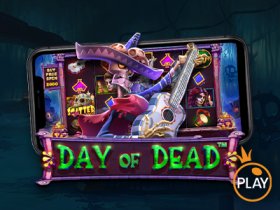 Pragmatic Play has just announced another exciting game, inviting players to join the festivities in the latest release, Day of Dead.

The new slot from the brand attracts customers’ attention with eye-catching visual elements and a fiesta soundtrack. It is inspired by the well-known Mexican national holiday, Dia de los Muertos.

The main elements of the game are Wilds. They move one position across the reels with every spin until they fall off, delivering any wins and activating respins before they do. Respins will proceed to occur until there are no Expanding Wilds. Players who are lucky to land three Scatters on the first, third, and fifth reels in the main game will trigger the Bonus Game feature. There is no determined number of spins here, rather the feature will continue as long as there are Expanding Wilds on the display.

Players in certain jurisdictions can use the Buy Feature, which costs 100x the bet and activates the Bonus Game feature on the following spin.

A Feast for the Senses

“Dia de Muertos is a very unique festival that has some very eye-catching visuals associated with it, therefore we wanted to create a title that provides a true feast for the senses.

“We are thrilled with how Day of Dead™ has shaped up, with its dazzling graphics and unique mechanics combining to bring something entirely new to our portfolio.”

Pragmatic Play has just disclosed another major agreement in the industry. The company has closed a deal with Lucksports in Brazil to extend its presence in LatAm. The new agreement will see the company introducing is three verticals, slots, live casino, and virtual sports via the local brand.

According to the arrangement, LuckSports users will get access to the supplier’s collection of slot products, such as Wolf Gold, Piggy Bank Bills, and the latest Yum Yum Powerways. The company will also introduce its collection of live content, such as localized roulette, Blackjack, and Baccarat, as well as the game show – Mega Wheel and Dragon Tiger. Brazilian players will also enjoy virtual sports such as greyhounds, horse racing, and football.

Pragmatic Play is a well-known content provider to the industry, delivering innovative, regulated, and mobile-optimized gaming solutions. Its passion for premium entertainment is incredible and the company looks to become games across several categories including slots, live casino, and bingo.