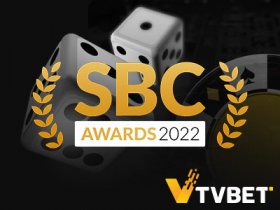 TVBET, the popular international provider of live dealer games for online casinos, has announced that its efforts over the past year have been recognized as it received two nominations at the 2022 SBC Awards.

The well-known provider has been nominated in two categories: Live Casino Supplier and Land-Based Betting & Gaming Product. This is the fourth consecutive year with nominations at SBC Awards for TVBET.

The SBC Awards have gained a lot of prestige lately, the ceremony has been held each year since 2014 and it recognizes the achievements of operators and affiliates, as well as suppliers from across all the major verticals in the gaming industry, including payments, marketing and platform providers.

In 2022 the SBC Awards ceremony will take place in Barcelona at the Palau Nacional on September 22, the final day of the SBC Summit. More than 1000 guests are invited to attend the event, along with the best operators, affiliates and suppliers in the world which compete in 45 award categories.

TVBET has already become a household name in the industry, with 16 live casino and lottery titles in its portfolio and over 200 partners such as online and offline casinos and bookmakers. The latest partnership that TVBET has signed was with Bitville Gaming and it happened just a couple of weeks ago.

The supplier broadcasts all its sixteen live dealer games from its studio in Warsaw, with events being run every two minutes or even less, 24 hours a day, seven days a week. Eight of the provider’s sixteen games are GLI certified, ensuring totally trustworthy gameplay and results.

The portfolio of TVBET also includes two exciting Indian-themed games: Andar Bahar and Teen Patti. Both games hit the market in 2021 and this year they received major updates, making them even more competitive on the red-hot live casino market.

Teen Patti is also known all over the world under the name of “Indian Poker”. It was one of the main family card games in India during the 20th century, especially during Diwali, the famous “Festival of Lights”. Then the game became more and more popular in private gaming clubs in Mumbai and Goa before conquering more territories throughout Southeast Asia.

Andar Bahar is still a very popular card game in India, with very simple rules. The game has two special sections, “Andar” and “Bahar”. The dealer starts the proceedings by drawing a single card, the Joker, which is placed in a specially designated space on the table. Additional cards will then be drawn one by one and placed alternately in the “Andar” and “Bahar” sections of the table. The goal of the game is to find a card of the same value as the Joker.