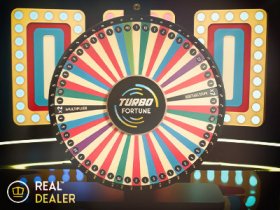 Real Dealer Studios, the developer of innovative online casino games that mix recorded videos with RNG gameplay, has announced the launch of a brand new title that got added to its portfolio: Turbo Fortune.

The new game represents a streamlined variant of the Fortune Finder series of money-wheel games. These titles combine a classic look that was inspired by the television game shows of the 1980s with big prizes and exciting multiplier rounds.

The original Fortune Finder games had a presenter that kept the audience entertained, but in Turbo Fortune that role was scrapped, focusing on fast-paced gameplay instead.

The visual style remains the same, but in Turbo Fortune the players will get to experience a wide range of quick betting options and an autoplay feature that is designed to keep the gameplay extremely fast and fluid.

Turbo Fortune, as all the other games from Real Dealer Studios, benefits from gameplay footage that was shot and edited by cinema professionals. The game offers high-quality visuals, on par with what you can find in Hollywood movies, and crisp sound.

The shorter game rounds are bound to keep the players on the edge of their seats, while the compound multipliers can drive the potential prizes to extremely high values. The multipliers can boost the prizes for the next spin between 2x and 7x, but they can be stacked and create potentially immense wins.

About this new game, Shane Cotter, Chief Product Officer at Real Dealer Studios, revealed that it was designed with time in mind, that is why it is streamlined and speedy while keeping the looks of the previously successful Fortune Finder series.

Real Dealer Studios has been releasing new titles on a regular basis this year, but so far they have been mainly new versions of the classic roulette game. In March 2022, the developer unveiled Turbo Auto Roulette, a game that was designed to bring players into a sci-fi roulette world, in which the gameplay is action-packed and has an extremely fast pace.

Then, in April 2022, Real Dealer Studios launched Dealers Club Roulette, a groundbreaking new product. This title represented an industry premiere as it was the first RNG (random number generator) casino game in which the dealers switch at regular intervals, just as they would in a real land-based casino.

Last month, the developer unveiled Scarab Auto Roulette, an exotic product that takes players on a journey to Ancient Egypt through the mysterious Temple of the Scarab.