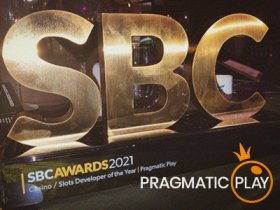 The awards ceremony was held in London, at Battersea Evolution, with hundreds of top executives from the iGaming industry gathered as the brightest people and companies were rewarded for their activity in 2021.

In this context, Pragmatic Play received the Casino/Slots Developer of the Year award, with the panel of judges motivating that their decision was mostly due to the provider’s unrivalled product portfolio and continued commitment to innovation.

In fact, the offering of slot games from Pragmatic Play has grown significantly over the past year as more and more successful games were launched. One of the top performing products of the year was Gates of Olympus, a slot game that won a few awards of its own.

That increasing portfolio allowed Pragmatic Play to grow into new territories and regulated markets, and this year the supplier experienced particularly impressive growth in the Latin America region.

Pragmatic PLay has also won the Game of the Year prize at EGR Awards, along with numerous other prizes in South America at SBC LatinoAmerica and Gaming Intelligence Latin America Awards.

Pragmatic Play also invests heavily in the live casino vertical, and that was proven by the launch of an impressive brand new title at the end of November: Sweet Bonanza Candyland.

This new live dealer game is derived from Sweet Bonanza, a very successful slot game that was launched by Pragmatic Play in 2020. The action from the slot game was developed into a game-show type live casino title, which aims to combine virtual reality with a real-life environment.

Pragmatic Play also has an important focus on the Indian market and even decided to launch two special games for players in this country: Andar Bahar and Roulette India. The two games were launched in October 2021 and both are broadcast from the company’s world-class studio located in Bucharest, Romania, which features multiple 4K cameras and 24/7 availability.